I’m writing today’s literary offering sitting in Starbucks at Leeds train station. As usual when I commence these whimsical offerings, I’m unsure of what ideas will manifest themselves within the next 500+ words.

However, I do know I’d like it to be coffee related so I can utilise the heading ‘Better Latte Than Never’. Meaning I’m setting myself the challenge of moulding the monologue to bear relevance to the adapted title.

My initial thoughts for the fictional narrative surround procrastinating staff and drinking latte because they were unable to create my usual Americano coffee with milk. The conundrum I have currently, though, is crafting this unlikely tale into how Starbucks can provide me latte but not Americano. After all, their ingredients are identical, the hot beverages are just created in a different manner.

I’ve already discarded a ludicrous notion that I was imbibing the latte as a consequence of the Great West Yorkshire Americano Famine. Similarly, I’ve binned an equally inane idea that the baristas’ coffee making skillset only expanded as far as latte. 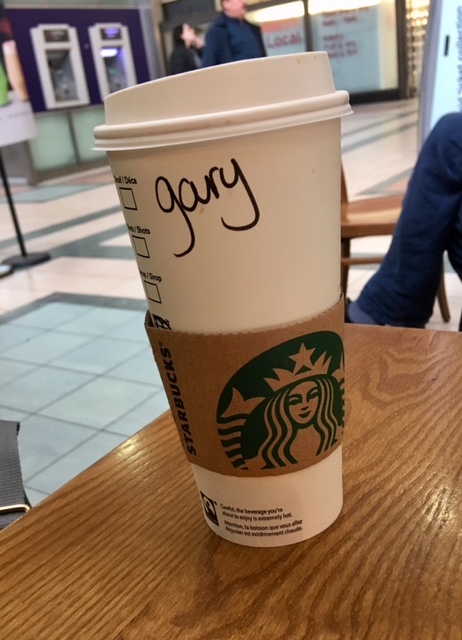 I’m currently 200 words into this piece and inspiration for manipulating the words to fit it’s creative title still evade me. Determined to utilise this title, though, I plough on manfully at a table in my favourite coffee house whose name contains the words star and bucks.

A pigeon currently meanders around my feet looking for scraps of food from the table’s previous occupants. Via telepathy, I seek the scavenging avian’s input on how I can mould this fatuous yarn.

Through the power of thought transference, my feathered friend proffers “How about writing it was a consequence of the Great West Yorkshire Americano Famine of 2018, Gaz!”

“I’ve already consigned that idiotic notion to the recycle bin, Feathers!” I reply despondently, while utilising the unoriginal moniker I’ve just bestowed on the pigeon. My overuse of extra sensory perception (ESP) in engaging with the scavenger now starting to give me a splitting headache.

Feathers then enquired “Have you tried imparting your readership your enforced beverage switch was the result of the baristas’ coffee making skillset only expanding as far as latte?”

“Yes, and that’s also been discarded as ludicrous” I informed the little avian, before he dashed off towards McDonalds with a mischievous toddler in pursuit.

On his return to my table Starbucks in situ, the pigeon used PES (he was apparently dyslexic) to inform me “Incidentally, if you want to give me a nickname, can you make the effort to come up with something more innovative than Feathers!!”

“What would you like to be called?” I enquired approachably.

“If I refer to you as Thor, will you help me overcome my current lack of inspiration?” I politely questioned my feathered friend.

“No!!….. Do it yourself you lazy get!” came the unexpected answer from the avian.

“Feathers you’re nickname stays then, you scavenging rat with wings!” I informed the unhelpful bird.

At this point, Feathers scarpered with another young child chasing him towards Maccy D’s. Leaving me with my lukewarm latte, an unwanted consequence of the bloody 2018 Great West Yorkshire Americano Famine.