I had a visit to my GP’s this morning for my annual health checkup. This involved a blood test, as well as blood pressure, weight and cholesterol checks, followed by dietary advice.

The nurse who undertook the checks was happy that my weight was within recommended parameters for my height. However, I did receive the following advice when discussing my diet:-

Nurse – “From a health perspective, I’d recommend you cut back on your diary.”

Nurse – “No diary. If you don’t stop writing a daily blog I’ll kick you in the nuts!”

As I said above, the nurse informed me that my Body Mass Index of 24 was within acceptable parameters, when comparing my weight to my height. Mind you, if I’d have told her my true height instead of fibbing I was 8ft 2in tall, I might have been struggling to meet a respectable BMI!

Seriously, though, I’ve not felt that well recently and for some reason have become very aware of my own mortality! I think that feeling is one of the reasons I’ve started printing off the majority of the stuff I’ve written over the last few years. I class it as my legacy to the kids. Whether they want it, or decide to use it next summer’s barbecue fuel, remains to be seen!

Admittedly, I do need another hobby at the minute. A friend suggested I try racing pigeons as an interest; but I’ve no chance of beating a bloody pigeon in a race, so I dismissed that idea immediately!

However, an activity incorporating exercise is of paramount importance for me at the minute. I walk regularly but, because Karen cannot walk fast and has to stop regularly to sit down, I don’t think it is brisk enough to be classed as a meaningful workout.

Luckily, I’m not a naturally overweight person, otherwise my recent inactivity may have had even deeper reaching health consequences. I’m unable to pinpoint exactly what is causing this lethargy and feeling of being unwell. I’m just aware my body is trying to tell me something at the minute and I don’t think it’s “Your fly is open, Gary!”

I did exercise by playing five a side football, cricket and visit the gym regularly until a few years ago. However, since Karen’s diagnosis I’ve dropped them all! Her illness is no excuse mind, so I need to get my head out of the clouds and stop hiding behind that as an excuse not to exercise.

I did join a couple of walking groups earlier in the year, which provided some very picturesque and, at times, challenging walks in the Yorkshire Dales. However, I’ve let that slip recently which is something else that requires addressing!

Karen has been very supportive and has suggested that walking the ten miles to my parent’s home would have several health benefits. Especially if I take my stuff with me and don’t come back!

Apparently, the benefits to me would be improved fitness from the ten mile walk. In addition to increased life longevity, from her not strangling me for winding her up relentlessly!

Talking of healthy eating, I made a chicken and vegetable broth yesterday. I know i wasn’t talking about healthy eating; it was a ingenious if not lazy strategy of mine to crowbar in a tale about my culinary efforts yesterday!

I utilised the chicken carcass from our Sunday roast to make the stock and get chicken meat. After removing the carcass I added potatoes, leek, butternut squash, carrots, parsnips, onions and a bayleaf. I then put it on medium heat said the magic words “Turn into broth, you b*****ds!” and let it simmer for 25 minutes.

My ingredients for the broth 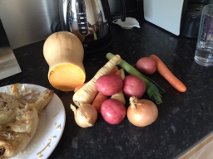 I got the recipe from the Jeremy Clarkson book “Recipes That Don’t Contain Socks!”, that my wife Karen bought me it as a present at a book signing. She couldn’t be bothered to wait in the queue for Clarkson to sign it, so got it autographed by a store security guard with the curious name of Frank ‘Frankie’ Franklin!

i wouldn’t care, Frankie didn’t even pretend to be Clarkson; he just signed it with his own name! So now I’m in possession of a book about cookery, written by a motor presenter and signed by a security guard!

It’s an unwanted present, but I have to say the chicken and veg broth recipe is well worth a try! It was tasty, wholesome, warm, healthy and didn’t contain anything I’d had on my feet, unlike my last broth! It was real comfort food which was complimented wonderfully when served with rustic bread.

I’d like to clarify my comment about not containing anything that had been on my feet in my last broth. In my defence, how was I to know the pan I added the veg to contained a pair of my socks Karen was boiling clean!………. I thought the socks were a large bouquet garni of herbs!

Chicken and Vegetable Broth – Tasty, comforting and not one sock in sight! 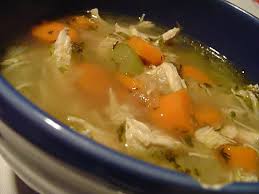 Right, Karen is out after having her treatment. Time to leave the Bexley Wing at St James’ Hospital and head back for lunch!