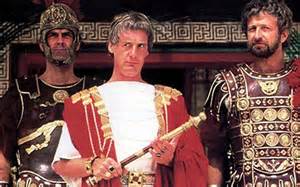 “All right, but apart from the sanitation, medicine, education, wine, public order, irrigation, roads, the fresh water system and public health, what have the Romans ever done for us?”

That famous line from a classic scene in Monty Python’s Life of Brian, should be re-written for my 22 year old daughter, who has returned home in the past few months after graduating from university. Her version would be something like this:-

“All right, apart from food, shelter, education at good schools, paying towards university, several holidays, my washing and ironing done, provision of more or less whatever I’ve asked for, what have you and mum ever done for me?”

Admittedly, we can’t claim to have provided roads, irrigation or an aqueduct for her. However, if she’d have asked, the unconditional love you provide for your kids means, Karen and I would have done our damnedest to somehow make that happen.

You’d never guess from my cynicism above, that we have just had a bust up with our daughter, caused by differing opinions as to what is and isn’t acceptable behaviour.

Let me first clarify that Rachel has never given us any serious issues to deal with throughout her life. However, on occasion her misguided self-entitlement in addition to her lack of thought and respect is quite galling.

Anyway, count to ten Gary! ………… Calm down and concentrate this anger and frustration at the far more trying circumstances in your life. Oh, or here’s an idea, just lose the anger!…………. Additionally, as I’ve said in the past, stop writing in the third person!

As the cast of Life of Brian sing at the end of the movie, always look on the bright side of life. After all, the thought process resultant from the family feud and subsequent blog research meant revisiting iconic clips from Monty Python films……… Bollocks, I’m still writing in the third person!

As much as I enjoy the clip above from the Life of Brian, I have to say that, the following from their movie The Holy Grail is has to rank as probably my favourite Python movie scene.

In that scene I particularly enjoy Dennis’ erudite rhetoric aimed at his repressor. His impressive ripostes to his newly found sovereign, who attempted to undermine the anarcho-syndicalism commune to which he belonged, show him to be a learned, literate and effective debater…………… Although, it must be said, I wouldn’t want to be stood downwind of him!

Blimey, I feel like a latter day Barry Norman with my thorough and insightful movie reviews. If you haven’t heard of him, he was the dry humoured presenter of a BBC TV’s weekly film review programme, which started in 1972.

Norman had a dint on the end of his nose, similar to that of late US actor Karl Malden, that looked like he has an arse on his conk………That isn’t really relevant to anything. However I thought I’d mention it anyway.

He was reputed to have the catchphrase “And why not?” as a suffix to most sentences. He denies using it, but here is a clip of him which I think shoots his rebuttal out of the water.