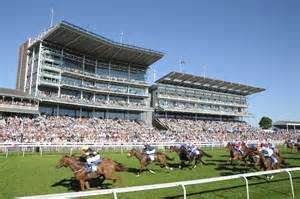 I had a day at the York races yesterday. Packed crowds, sunny weather and sporadic luck…………. They were just three of the flipping horses that let me down!

It makes a nice change to get ‘suited and booted’ and have a day watching the gee gees, at the aesthetically pleasing York racecourse………….. That’s horses by the way not a Bee Gees tribute act!

Her false eyelashes were so long it looked as though she had two caterpillars at the end of her eyelids. I had visions of them morphing into butterflies and fluttering off mid afternoon!

It was a warm day and the twenty five minute train journey from Leeds to York was unpleasant to say the least. Firstly, it was so late the train that arrived was run by a pre-privatised British Rail! Seeing as that was around twenty years ago that was one late train………….. I didn’t have the heart to tell the conductor his tickets for the Euro 96 Final at Wembley had long since expired.!

Once on the train we were thrust into a no holds barred fight for standing room! My wife, Karen, luckily got a seat amongst a half drunk group of blokes trying to ply her with rum. When I say lucky I meant getting a seat, not being offered rum by drunken blokes! Although, she might beg to differ!

My daughter, Rachel, and I were forced to stand throughout the journey surrounded by groups of young women ‘dressed to the nines’. They laughed heartily under the influence of the cider, pina colada and champers, as they fanned themselves, in a vain attempt to cool down.

Unfortunately, none of them offered a drink to the parched middle aged guy and his twentysomething daughter crushed by the doors!

Despite the discomfort of being cramped, warm, and having to stand for the duration of the journey, it has to be said the atmosphere was good onboard. Raucous lads and giggling lasses all excitedly anticipating of a few drinks, winning bets and getting to the point of the day when they could take their high heels off!

The high heel observation included some of the guys as well, as there was a group of them dressed as women. I assumed it was fancy dress, however, I could be wrong and it may have been the Cleckheaton Cross Dressing Association on a day trip!

We finally arrived and the feeling of being able to inhale fresh air again, as the doors opened, was most welcome and fulfilling. We alighted the train and joined the herd of people heading out of York station for their onward journey.

The Cleckheaton Cross Dressing Association staggered past us on the platform, as fast as their high heels and excess of alcohol would allow. One of them looked familiar as he staggered past with his floral dress and facial hair wafting in the summer breeze.

I’m not sure where I’d seen this person in my past. The beard and the speed of downing a can of Stella was reminiscent of an ex girlfriend! Who knows and more importantly who cares!

That’s a joke by the way, I’m not that crass or shallow! (cough, cough).

Food and drink were the order of the day as soon as we arrived. We were very dehydrated and in need of sustenance at this time. As we chose what to eat I got involved an argument with my daughter over how many bottles of water we needed!………….. Apparently, she needed one to herself but she opined that her mum and I should just share one!

I promptly told her to wind her neck in and paid the cashier £27 for a woeful fish and chips, Rachel’s carvery, Karen a sandwich and three bottles of water. I know you’re not really that bothered what we ate. However, I’m trying to paint a picture here, give me a break!

During the racing itself we had two winners and four second placed horses between us. We won a few quid but not enough to cover the bets we put on.

We had a big stroke of luck in the second race, when the bookmaker misheard me and accidentally put the bet on the number four horse, instead of the number three Rachel had asked my to back………. Number four won the race and she got £21 back!……….. Lucky sod! ………….. The Greek government immediately contacted her requesting a loan but she’s undecided whether to oblige at the minute! 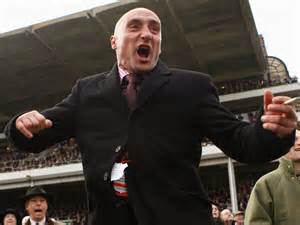 So it wasn’t a bad day overall. We had a couple of winners, a fight over bottled water, a rubbish lunch, queued for ages for everything and spent a fortune…………. Actually, coming to think of it apart from the two winners it was a rubbish day!

On the bus back to the station, I was interested to hear a guy with a Liverpudlian accent telling his wife his new shoes were pinching………….. Bloody Scousers, even their footwear is on the rob!…………… I know that’s a lazy generalisation, however I included it because it’s a true story!

A scouser (Not a thief I hasten to add) 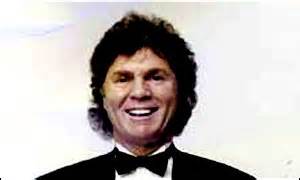 To compound his bad day he hadn’t had any winners and was refused membership of the Cleckheaton Cross Dressing Association!

cp30 not gjstrac63. Although he has the same startled look!