It’s fifty years to the day that Great Train Robber Ronald Biggs escaped from Wandsworth Prison. He took flight by climbing over a 30ft prison wall on a rope ladder thrown over from a waiting van outside.

The security during the incident, seems about as lax as Peter Sellers and his cohorts encountered during their jail break in the 1960’s prison comedy Two-Way Stretch!

It appears a surprisingly easy escape! Especially when you think he was part of a gang who undertook one of the crimes of the century robbing a Royal Mail train of £2.6 million (the equivalent of £49 million today) in August 1963.

Biggs was initially jailed for his part in the robbery for 30 years. He nearly got a longer sentence, after he foolishly engaged this man as his advocate ……

Anyone who doesn’t watch the US animated show The Simpsons probably won’t have a clue who that is. The gentleman in question is incompetent lawyer Lionel Hutz. He attracts desperate clients with his cut price legal fees and a free pencil eraser with every case.

Anyway, Hutz’s defence that Biggs couldn’t have been at the scene of the crime, as he was sleeping with the judge’s wife at the time, did his client no favours at all!  A furious Justice added further time to his sentence, until it dawned on him he wasn’t even married! After reducing the sentence back to its original, he dubbed Hutz a fool and confiscated Biggs’ free eraser, much to his chagrin!.

After his escape, Biggs became a fugitive from the law for the next thirty six years, predominantly in Rio de Janeiro, Brazil. Here the anti-hero evaded being returned to the UK due to no extradition agreement being in place between the countries.

In 1974, Biggs gave an interview to the Daily Express from Rio. This was passed onto Scotland Yard who dispatched DCI Jack Slipper to arrest him and bring him back to the UK. This failed though due to Biggs’ Brazilian girlfriend being pregnant with his child at the time.

The Express, which my dad bought on a daily basis, followed and reported the story with the same tenacity as they convey their thoughts on immigrants to the UK now. On an almost daily basis, they fed the British public’s prurient fascination with Biggs’ antics.

He returned to the UK voluntarily in 2001 in ill health, serving eight years before being released on compassionate grounds in 2009. He died in a North London care home in December 2013.

He, along with Bruce Reynolds and Buster Edwards, was one of the more famous members of the gang. Biggs’ fame and notoriety probably came more from his escape in 1965 and his thirty six years as a fugitive, rather than his part in the robbery itself. History will record that these individuals have a lot to answer for.

For example, if Buster Edwards hadn’t have got involved, his bio pic ‘Buster’ wouldn’t have been made. Meaning we wouldn’t have to endure the song Groovy Kind of Love by Phil Collins! ………. Damn you Buster!

I remember as a kid in the 1970’s, the song No One Is Innocent by the punk band The Sex Pistols paid tribute to Biggs with the following lyrics:-

Ronnie Biggs was doing time until he done a bunk.
Now he says he’s seen the light and he sold his soul for punk.

I’ve no idea, on regaining his liberty in 1965, if he saw the light or indeed sold his soul for punk. However, his part in the gang that robbed the Royal Mail train fifty two years ago, along with his daring escape and time on the run, will ensure his notoriety will live long in the British public’s consciousness! 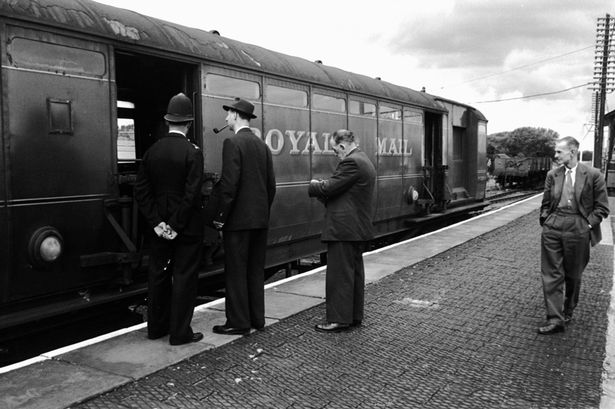