It’s a few days since I’ve written anything. This is not due to writers block or my wife hiding my laptop (although that was restricting) but moreover the result of decent weather in the Leeds area in the last few days.

On Monday I was at Roundhay Park where, as it was a Bank Holiday, it was absolutely chocca block. They say the only man made things you can see from space is the Great Wall of China and Piers Morgan’s ego! …. However, I would be surprised if the massive queue to get into Tropical World at Roundhay Park wasn’t on view when I was there!

Today I was at Golden Acre Park in Leeds, for a quiet walk…. What do you mean, does this get interesting at any point?! ……. Give me a flipping chance!

Whilst there I saw one of the most striking plants I’d seen since … errrr well…. the last time I saw a really striking plant! It was called a ‘Water Skunk Cabbage’ (yellow plant pictured below) and was a strange horticultural juxtaposition, to say the least! It was a vision of undeniable beauty but it had the most horrendous rancid scent! … Definitely not for the garden unless your sense of smell gets hijacked! …….. To answer your question then, “No, the bloody story doesn’t get any more interesting!

I jet blasted the patio on Tuesday. I’m very impressed with the Karcher power spray which was so powerful it changed my garden beyond all recognition! … See the before and after pictures below! ………. As a footnote and for balance – Other jet power spray products are available! 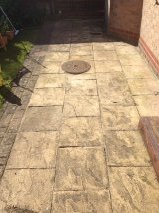 Was chatting to an old guy at Golden Acre Park who was a bit of a Walter Mitty character! …. That is basically a polite way of telling you he was a right f***ing liar!

Whilst eavedropping into a rare intellectual conversation between Karen and I about art, he butted in and told me he had a Chopin painting! I politely turned and advised him that Chopin was a composer! … After a brief pause he grinned and responded “Was he? No wonder it was a shit painting then.”

I had a moment of pride yesterday when I was told by an elderly relation that a great uncle of mine had been decorated during WWII …. I say a moment of pride because I then found out they were talking about his kitchen being emulsioned white in 1940!

Despite my delaying tactics and protestations I finally gave in and saw fifty shades of grey with Karen today! … Yes, I’ve just spent an hour going through the Dulux paint chart as she wants me to decorate the hallway!

Right, I’m off to find out what Lardons are as Karen wants me to fry them for dinner!