Wednesday 16th May – Akin to others who spent their fledgling years in the 1960’s/70’s, I occasionally feel millennial offspring miss out by not experiencing the minutiae of growing up during that era.

Amongst these minor missed ‘adventures’, I’d add never encountering a Spangles sugar rush. A hallucinogenic high that back in the day took me on a cosmic journey around my childhood locale, Low Fell in Gateshead…. A trip that on one occasion led to a friend questioning “Have you seen that new pub sign, Gary?…. Some idiot’s misspelt The Croon as The Crown!”

Spangles the sweet that launched a thousand sucrose induced tooth fillings. A boiled sugar candy that kept 1970’s Low Fell dentist Mr Davison in Faberge Eggs…… Or it would have done if he’d been a private dentist.

The sweet, which ceased production in the 1980’s, could never have been labelled the Ferrari of the confectionery world. I’d liken them more to the Hillman Imp – Reliable but underwhelming. It’s enigmatic Old English flavour** a taste which divided opinion, as well as tooth enamel.

** Spangles not the Hillman Imp…. To my knowledge the rear engine cars, which ceased production in 1976, weren’t flavoured by maker Chrysler.

Being a mistrusting lad, I always thought Mars’ lack of specificity surrounding the flavour meant they’d something to hide***.

*** Mars Ltd were the candy’s makers 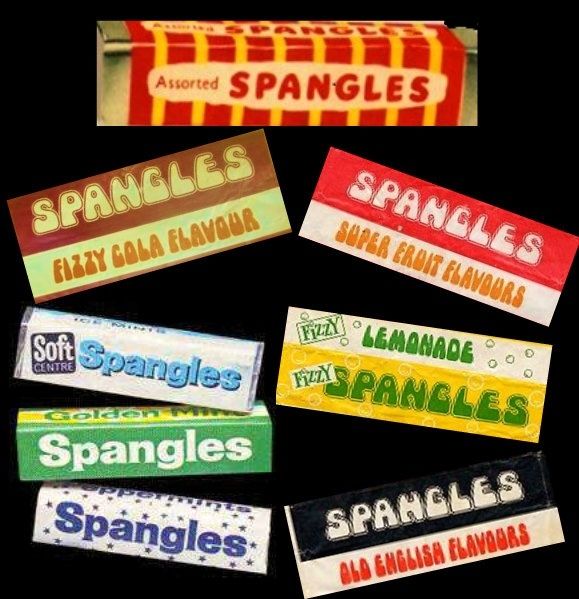 In addition to a childhood bereft of Spangles, millennials also miss out on being brought up in a home with a family TV set had the scale of size to adorn ornaments. My childhood telly had a top donning a table lamp, an urn containing my great-uncle Frank’s ashes and a faded photo of Frank in happier days before he entered the urn.

Although, you wouldn’t have known they were happier days by viewing the picture – The miserable old get!……. Frank’s urn donning a brass plaque, complainng ‘I told you that bloody central heating was on too high!’

In middle-age I feel blessed to have experienced the childhood joy of recording Sunday afternoon’s top 20 hit parade on audio cassette. Another encounter that’ll never reside on a millennials childhood bucket list.

An occurrence requiring speedy reflexes and a cool head, allowing swift swapping of cassettes to capture the remainder of the song. It wasn’t ideal having, for example, the first half of Queen’s ‘Bohemian Rhapsody’ on the stricken tape while the concluding acapella segment resided on alternative media.

That being said, though, for the less self-entitled kids of the 1970’s it was a first world problem. Personally, I remained unperturbed by the ‘hardship’ of a brief recording break between Freddie Mercury and his band singing ‘I sometimes wish I’d never been born at all’ and –

This pause a consequence of hurriedly swapping cassettes mid-song.

You always knew after these incidents the first tape wouldn’t ever be fit for recording purposes again. However, if I could at least restore the damaged cassette tape tension with a pencil, I’d be probably able to play the first part of this classic 1970s song at my leisure.

This switching of audio tapes mid-song wasn’t ideal, however it was an inconvenience my peers were ordinarily programmed to dealt with. Unlike many millennials, kids of my generation didn’t have the existential expectation that we shouldn’t ever be inconvenienced. A worthy mantra most took into adulthood.

In an age of Apple Music, Deezer and Spotify, faffing around with audio cassettes to record music probably won’t sell the 1970s as a great time to capture copies of your favourite tunes.

In the contemporary digital age there is of course no comparison between eras. However, our less technological upbringings instilled a knowledge advocating the fallaciousness of unconditional self-entitlement. A valuable lesson brought from our childhood.