Saturday 12th May – Ordinarily I endeavour to avoid airing some of the more bizarre epiphanies that uninvitedly plump themselves into my conscious mind.

“You could have fooled me!” I can hear you cry at 27 Cleckthorpe Street, Goole, Humberside…… Yes, you picking your nose – Use a hanky and go wash your hands you dirty article!

These are times of inane inquisitiveness. Recent examples of which, my pondering of can retired basketball player Magic Johnson really perform magic tricks?….. Not forgetting, mulling over if Mr T was so adverse to vowels why did he join the A-Team?…… Not to mention, my dilemma of should I get a tattoo of Tattoo from 1970s/80s TV drama Fantasy Island.

Admittedly, they’re trivial contemplations whose answers add nothing to my sojourn along this mortal coil. Unless, of course, I get questions relating to those Magic Johnson or Mr T conundrums in a pub quiz. Under those circumstances, possessing knowledge of the former basketball player’s ability to saw a woman in half may secure me a meat hamper; or indeed a pass to experience the wonders of Birtley theme park Pork Scratchings Land. 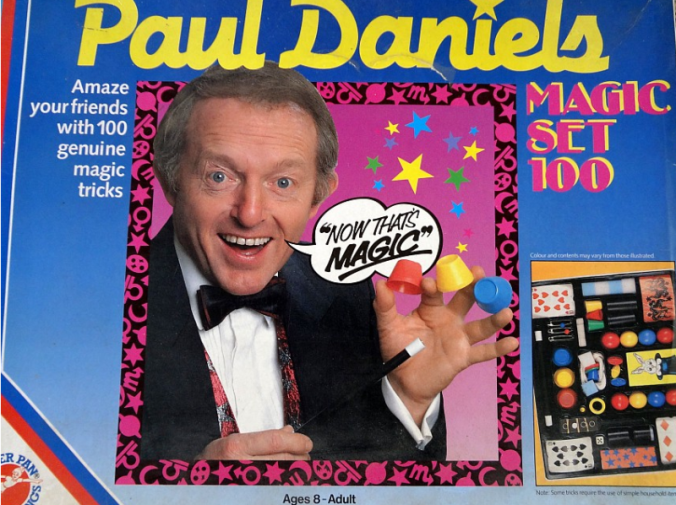 One day I may be able to use this creativity in a positive fashion, tangibly enhancing my existential odyssey. Utilising ideas for recompense more fulfilling than winning a hamper packed with silverside beef, pork chops, Cumberland sausage, smoked back bacon, onions** and scragget***.

** – Yes I know onions aren’t a meat, but they’d make a nice onion gravy with the juices from the silverside.

*** – Scragget is a fictional animal cut I invented while my brain floundered for the monikers of other real meats….. On the plus side, with it being a fictional meat it’s suitable for vegetarians.

Unfortunately my mind works without a filter. As a result, to keep receiving the decent creative epiphanies I have to endure the darker, more idiotic ideas. Many of which I keep to myself in a bid to not elongate my already extensive rap sheet of fictional shame.

Questions like ‘Would people from the West Midlands of England call the Great Wall of China the Bostin Wall of China****?’ ordinarily wouldn’t make the pages of my narratives. It appears now merely for example purposes.

**** – For the uninitiated, a subset of West Midlanders replace the word great with the colloquialism bostin……. Incidentally, I believe bostin only replaces great, in the lands just west of Birmingham. I’m pretty sure the word isn’t applicable to grate. So it isn’t the case people from the Black Country use a cheese bostiner to shred their Red Leicester.

On a completely different topic, tomorrow I’m joining a group of MacMillan Cancer Support volunteers marshalling the Leeds Half Marathon. The team’s remit, giving the runners encouragement, water and ask them if they know if Magic Johnson has the wherewithal to pull a rabbit out of an empty top hat.

Like many other high profile city runs, I’m unsure if anyone wears fancy dress in this particular race. However I’m secretly hoping at some point I’ll get the opportunity to provide moral support to a runner dressed as a carrot. Or indeed a stoic athlete donning the attire favoured by vowel nemesis Mr T.

I’m full of admiration for all of the runners who’ll endure a gruelling jog around our West Yorkshire metropolis. But anyone who adds a degree of difficulty to the challenge by undertaking it donning a heat inducing costume, in my book, deserves additional encouragement.

Talking of fancy dress costumes, during a family lunch a few years back, the subject of cricket supporters adorning this outlandish attire rose it’s head.

During this conversation, I pointed out that in the past on Test Match Saturday’s you’d always see a group dressed in lurid gold tracksuits. Their tongue-in-cheek homage to late TV presenter Jimmy Savile. I went on to point out that, unsurprisingly, since his outing as a paedophile it was a practise no longer adopted by Headingley revellers.

Everyone assembled concurred, before my mum added “I bet you don’t see many Stuart Halls now either!”