I had a strange dream last night. In series of images played back in time lapse motion, it told a tale of my involuntarily initiation into an organised crime ‘Family’.

Thrown into an unwanted life of crime, I was more or less held against my will by this hard fisted, uncompromising group. Led by a bloke who looked like my mum without her tattoos, broken nose and knuckle duster, I was promised lots of benefits to join the collective, including being given the nickname Spats.

After my English teacher Mrs Shoestring disparagingly advised me when I was aged 15 “You’ll never amount to being a gangster called Spats!”, I’ve been driven to prove her wrong.

I have only vague recollections of my unwanted role in this unsavoury gang. However, I do remember a stint looking after the bees at the Godfather’s mansion house in an Italian American area of Garforth.

Being Tony Soprano’s beekeeper was a challenging role, particularly as I didn’t have a beekeeper netting outfit to protect me from being stung relentlessly. Apparently in the criminal underworld it’s ‘character building’ to handle Apoideans without the protection afforded to ‘civilian’ beekeepers.

Within the ‘Family’, the level below the Capo’s were particular brutal. Amongst their regime of keeping new members ‘in line’ was to subject them to regular punches on the proboscis to toughen them up. With a face is heavily pitted with bee stings the pain of the experience was one of heightened pain!

It was a dreadful time, the only positive aspect being having unlimited access to top quality honey on my toast. Well it was until one of the ‘Family’ got to hear about it. Apparently, toast adorned by a honey topping was deemed not alpha male enough a breakfast for these blaggards. 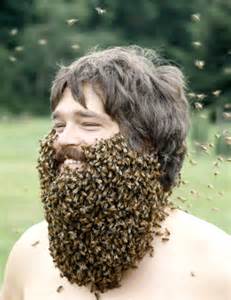 As a punishment for the unauthorised breakfast of toast and honey, I was made to undertake my role the next day in my birthday suit. After my 8 hour shift of beekeeping in the buff, the stinging wounds were horrific. My body was red raw and full of lumps. I ended the working day looking like a giant piece of Lego.

While sitting moodily pouring over my evening meal of gabbagool, porchetta and gooblywoobly, I was thoroughly fed up. Not only was I very sore from the multiple stings, but I’d just found out promises of job benefits Luncheon Vouchers, been given the name Spats and being taught what va fungu meant were lies!

Instead I was given the nickname Beesy, which displeased me due to its  inappropriateness as a gangster moniker ……. It appears Mrs Shoestring was right all along….. Grrrrr

Meanwhile, the top table of ‘made’ guys sat gorging on the bolognaise, wearing hats made from honeycomb, while quaffing Paul Masson’s Californian vino. They laughed and reminisced about the times they’d also had multiple stings on their testicles as new ‘Family’ members.

I wanted to escape from the life of purgatory I’d been conned into, but as the dream was in time lapse motion I couldn’t run away fast enough!!

I woke from this bizarre scene of gangsters, bees and dishonest job benefits shorty afterwards. I then headed downstairs where my wife was sat having her breakfast of Special K cereals.

She enquired as to the quality of my sleep, to which I sleepily grunted a response that even I didn’t know what I’d said. “What do you fancy for breakfast, Gary?”

I took a swig of my cup of tea, prior to exclaiming “I’ll have anything, as long as it’s not bloody honey on toast!”