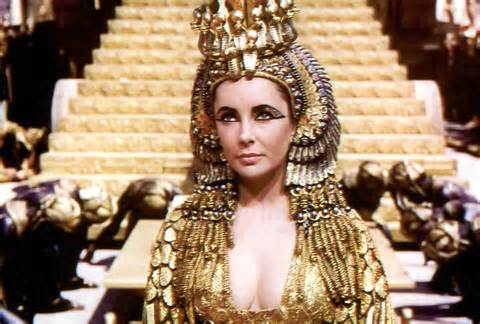 On this day in 30 BC, Cleopatra died after committing suicide by means of a fatal asp bite. She took this tragic step after hearing of the suicide of her lover Mark Antony.

There is plenty of conjecture about the cause of Antony’s suicide. Some claim he took the drastic action after losing the Battle of Actium to Gaius Julius Caesar Octavianus’  forces in 30 BC.

However, others claim it was the result of an argument with Cleopatra because she refused to let him get the Gladiator Channel on cable TV. Neighbours state that, on the fateful day, they heard him yell “You can shove your cable TV up your ass! I’m going down the pub!”

When he finished his tirade, Antony allegedly stormed out of their modest three bedroom semi in Alexandria and it was the last time Cleopatra saw him alive!

I’m no historian but after careful analysis I suspect the first theory to be true! She was so devastated by the passing of the father of her three children that she took her own life with snake poison.

A consummate beauty, Cleopatra led a colourful life. She was the last Egyptian Pharaoh prior to Egypt becoming a province Aegyptus, which was part of the Roman Empire. It is said a romantic liaison with Julius Caesar cemented her grip on the Egyptian throne. 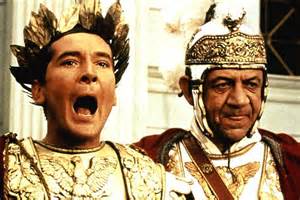 She met Caesar at a speed dating event in Cairo. They hit it off immediately, even though initially she thought he was “Full of shit” when he first said he was the leader of the Roman Empire!

It wasn’t until he showed her his ring of office that she believed his identity was genuine……….. You can write your own punchline to that!

Her other lovers included Mark Antony, two of her brothers Ptolemy XIII and Ptolemy XIV (that was normal then apparently!), as well as actors Richard Burton and Sid James.

When Caesar was assassinated in 44 BC, following a conspiracy by several Roman Senators including Marcus Junius Brutus, Quintus Ligarius and Disloyalius Bastardius, Cleopatra aligned with Roman General Mark Antony. This was an open snub to Gaius Julius Caesar Octavianus.

Caesar when he finally becomes aware of the plot to kill him!

She and Antony bore three children together twins Cleopatra Selene II and Alexander Helios, and another son, Ptolemy Philadelphus.

Cleopatra remains a very popular figure, whose face and story has inspired many works of art and literature. Three of the most notable pieces about her were Shakespeare’s tragedy Antony & Cleopatra, George Bernard Shaw’s Caesar & Cleopatra and the movie deemed to be the most historically accurate, Carry On Cleo!

A rare picture of Cleopatra deep in conversation with Mark Antony. The guy photo bombing the photo was a eunuch whose spray tan had gone a bit wrong! 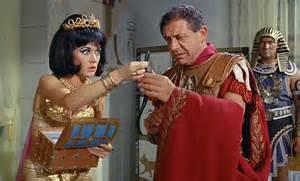 Apart from inspiring writers, artists and debate, what else is Cleopatra’s legacy? Some historian paint her as a woman of few scruples. They say she used the limited power that she had—personal charm rather than force of arms—to try to safeguard her land and her subjects.

She was a woman in a man’s world who was not content to merely be a nominal queen or the matriarch that validates her brother’s or son’s rule but wanted to be an actor in her own right. In a sense, she rebelled against men’s manipulation of her traditional role. Perhaps no man could have done as much as she was able to do to stave off Roman domination, even though her efforts eventually failed.

Oh and without her the Cleopatra & Ferret pub in Walsall would have a boring name like the Red Lion!