Well, after weeks of anticipation the 7th May is almost upon us.

After their months of hard work, we will soon find out which sweaty unappealing bloke will be victorious!……….Yes, not long now until the Betway Premier League Darts season starts at the Metro Arena Newcastle on Thursday!

Oh, apparently there is an election of some sort on that day as well! 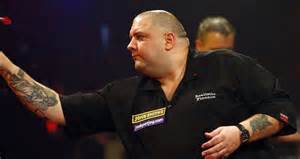 It’s good to have my son Jonny back today. He has driven over for the day from his home in York. He always raises the spirits within the house with his affable nature and general cheeriness.

He has been trying to teach his mum how to read music to assist her with her piano tuition. Amongst other things, Jonny taught her that the notes on the staff lines of the sheet music were EGBDF. A tip to remember this acronym was the saying “Every Good Boy Deserves Food”……….

He then added “Talking of which, will you make me a sandwich please?!”

Jonny teaching his mum how to read music ……. 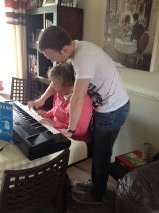 Whilst he was here, he showed his mum and I a game he’d downloaded on the phone called ‘Heads Up’. It is a kind of charades, in which a person holds the phone to their head containing the name of an activity. The other players then carry out actions to assist guessing the word(s) contained on the phone screen.

Karen had ‘Making the bed’ on her screen, which amazingly she guessed from a few seconds of Jonny randomly waving his arms about! ….. I say amazingly because I’m impressed he knew the actions, as to my knowledge he’s never made a bed before!

Jonny attempting to make his bed when younger…

I’d like to take this opportunity to wish a Happy Birthday to my dad Malcolm!

He’s a quiet, unassuming man who is happiest in the company of his family with a glass of red listening to Sinatra, Torme, Bennett or Newley….. Unfortunately, he often can’t hear it for my mum yapping, but those are the breaks I suppose!

Even though he can’t read this I’d like to thank him for all he’s done for me over the years! ….. Apart from the excruciating chinese burn he gave me in 1983, from which I still bear the scars! 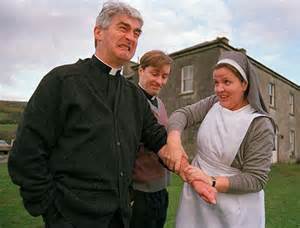 He is one of the few people I’ve met who hasn’t got a bad word to say about anyone. Well, apart from the insincere late tv presenter, from 1960’s/70’s, Hughie Green who he disliked intensely. I never got to the bottom of why, but I’m sure he had his reasons!

He and my mum are very close and, despite 54 years marriage, she always takes time every day to whisper those four special words to him …… “Malcolm, you’re flies open!”

I caught up on last Friday’s tv show ‘Gogglebox’ this morning. For those who don’t know, the format is members of the public filmed in their own homes commenting on tv shows as they are being broadcast.

It is very humorous, although some of the public aren’t the brightest. This week one of the shows being reviewed was a documentary about the sad tale of two sisters separated over thirty years ago in Cambodia. This was during the time of the Khmer Rouge where 25% of the population were butchered!

Apparently anyone deemed as intellectual were the most vulnerable to execution! …. This is obviously dreadful. However, I couldn’t help but think while watching that the people reviewing on ‘Gogglebox’ wouldn’t have had anything to worry about!

Some of the ‘Gogglebox’ families! …..