Like most of her colleagues, the motives of the rotund Breckenbeds Junior High School English teacher Miss Robertson’s were ordinarily well-meaning. Her unenviable aim that of indoctrinating indifferent pupils with an appreciation of literature, robust grammar and the spoken word. No easy task with a bunch 11 year olds who, like me, resisted wading through books when confronted with a tome more literary challenging than Enid Blyton’s Famous Five or The Match annual.

Her weapons against her doggedly disinterested foes the locutions of Tolkien, Kipling, Shakespeare and Steinbeck. Literary wing men in the tutor’s battle with the obdurate student. Her resistant charges attitudes accurately covered by the adage ‘There are none so blind as those who will not see’.

The above proverb from a book not included within her recommended syllabus reading. Study of the ‘Good Book’ a responsibility of her colleague Mr Rowe, the Religious Education teacher with the remit of nurturing his classes spiritual growth.

Mr Rowe, he of the long curly dark mane similar to that which theists opine was the ‘go to’ hairstyle of biblical times. The young school lecturer making his subtle statement that hippiedom had one foot in 1970’s staff rooms.

The RE tutor one of the emerging breed of teachers attempting to undertake a new way of engaging with their classes; one in which the strap, slipper or cane were deemed outdated dogmas. This dreaded trinity (the aforementioned punishments not the Father, Son and Holy Spirit) no longer being the answers to all disciplinary questions in the classroom. 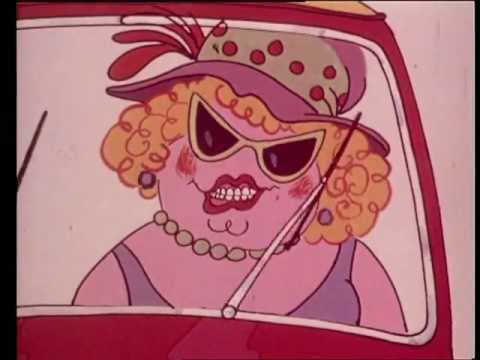 What the son of god thought of Miss Robertson is something I’m unable to convey with accuracy. Although I’d guess the confirmed spinster’s*** interpretation of the book relaying Jesus’ life story will have coloured the scale of amour held by god’s lad.

*** – I’ve no real idea if she was a spinster, or indeed confirmed. For all I know Miss R might have only been provisionally booked…… And no I can’t answer your question “Why the bloody hell did you make reference to it then?!”

At the time (1974), the English teacher always reminded me of a gap toothed, dark-haired, more intelligent version of Petunia (see picture above) on TV’s ‘Bert & Petunia’ public information films.

The lack of linear symmetry between the gap in Miss R’s front teeth playing havoc with the OCD of a lad in my class. Creating a tic that during one lesson saw him completely go to pieces while playing Antonio in a classroom re-enactment of Shakespeare’s The Merchant of Venice.

Miss Robertson was one of those older traditional school tutors I alluded to above, ruling the classroom with a rod of iron. Perhaps unnecessarily so at times. For instance, from a personal perspective she could’ve easily controlled my behaviour with the threat of me having to read The Hobbit for a second time. A book I absolutely loathed as an 11-12 year old.

Many deemed her as a harridan, which from memory could be true on occasion. But we did also witness her gap-toothed grin on several occasions. Generally after a charged submission of an erudite book review, a thought-provoking critique on the misuse of split infinitives, or indeed following a moving pupil recitation of her favourite sonnets.

Yours truly didn’t appreciate it at the time but, along with other high school English tutors, I owe Miss Robertson a debt of gratitude for her contribution towards my a later fondness of the English language.

Although sadly, through no fault of the teacher, my love of creative writing escaped me until I was middle-age in situ. This vocation’s reticence to show itself for four decades leading to the requirement of me plundering a living within IT, a field I found completely and utterly unfulfilling.

Disclaimer:- Within this narrative I make reference to the Simon & Garfunkel song Mrs Robinson, from the movie The Graduate. A film that charts the tryst between a young college graduate (played by Dustin Hoffman) and the predatory older woman (portrayed by Anne Bancroft)…… To clarify, there are absolutely no parallels between Mrs Robinson’s affect on the young impressionable Benjamin Braddock and that of Miss Robertson with her charges!!…..And yet again, I can’t answer your question “Why the bloody hell did you make reference to it then?!”