Today, a good buddy of mine posted photographic evidence of our attendance at the Leeds premiere of the movie Leeds United Stories Vol 1. This a verification of an evening in May, relayed in my parody narrative Red Carpet; White Hart.

My buddy Mike, is related through marriage to a former Leeds player and caretaker manager named Peter Gunby. A fact that my neighbour never tires of bringing up in verbal interactions over a beer or two. Examples of which include the following questions during a night at the pub:-

“Did I tell you Peter Gunby has threatened to kill me if I don’t stop basking in the glory of our family ties with him?”- 7th May 2012 while queuing for a takeaway at Zaam Zaams  kebab shop on New Briggate, Leeds.

Sadly the threat to Mike ‘requesting’ he stop associating himself with Gunby’s success in the field of football, fell on deaf ears from my east Leeds chum. Consequently, for years he’s continued to tell all and sundry how he looked after Peter Gunby’s hamster when the ex-Leeds employee took his annual holiday in Cleethorpes.

Mike also loved to brag the former caretaker Leeds manager had invited him to a day at a shooting range in Cluckthorne. That being said, my mate declined the request as he was otherwise engaged – Not to mention he knew Cluckthorne didn’t exist, leading to suspicions of his relatives motives.

I mention Peter Gunby in this narrative as he was referenced in the movie premiere we turned up to on that early May evening.

As a mentor and host to junior Leeds players prior to the club setting up of the Thorpe Arch academy a few years later, Gunby received kudos on celluloid for his contribution to the success of Paul Hart’s junior team winning the FA Youth Cup in 1993.

This led to my Gipton raised buddy standing to tell all in cinema screen two “I’m related to Peter Gunby!”……. A move that drew unwanted attention toward our pews in row three.

In my embarrassment, I hid from the glare of the large cinema audience behind a hand. It wasn’t my hand, but hiding my face with it meant I’d less chance of being thrown out than where it originally resided!

Mike meanwhile started standing in the theatre, arms wide seeking adulation for his tenuous link to the Leeds United story we were viewing.

“I think he was the bloke who invented Blankety Blank and Wheel of Fortune.” responded one movie goer.

“They were s***e!….. I wouldn’t be bragging about being related to him!” proffered a man in a Stetson on the row behind.

“I don’t think he was claiming to be related to Reg Grundy……. After all, I’m pretty sure the Aussie’s got nothing to do with Leeds United football club.” added the guy (I’d assumed was his mate) sitting next to him.

“Never say never about what?” the guy next to him responded in confusion.

“Never count your chickens before May is out!” his now flustered buddy continued incomprehensively. Aware he was digging a big hole for himself, beads of nervous perspiration gathering under his cowboy hat.

“I’ve no idea what your comments mean in the context of this conversation!” his bemused chum retorted.

“You know!….. The storm is sometimes before the calm!” he continued spouting incorrect and non-related adages.

At this point, Mike was still stood chanting “Walking in a Gunby Wonderland!” as the surrounding audience members bickered whether the inventor of Blankety Blank had ever managed Leeds United in a caretaker capacity.

As I watched the ensuing rucks, I looked to my right to see my buddy still singing in homage to his relation and couldn’t help but think of the following refrain:-

“Neighbours, everybody needs good neighbours. With a little understanding, you will find a perfect friend…..” 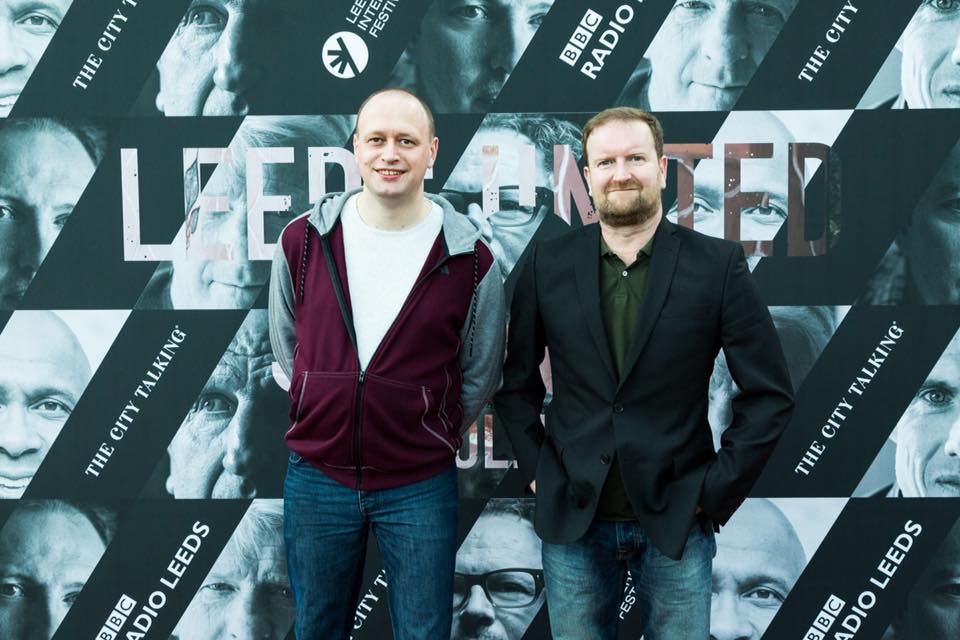