This morning, I made a start sorting the abundance of stuff cluttering my mum’s garage. My efforts followed receiving ‘constructive’ feedback from my mater that I wasn’t as tidy a gardener/odd job man as my recently passed pater. In particular in the manner which I replaced the tools in the garage on completion of work.

“That garage looks a right bleeding mess!” was the actual maternal feedback bestowed on the last occasion I undertook horticulture maintenance; so labelling it constructive is a tad generous on my part. Nevertheless, to pacify the old lady (who’s had a challenging few months) I forwent my usual Thursday role as gardener to tidy up wanted items stored in the garage, in addition to culling the unwanted.

In the few hours I spent at my mater’s gaff, I managed to tidy around a third of the area needing TLC. Additionally, I embarked on a sojourn to the local domestic waste tip to dispose of the metaphorical deadwood. Also, each item was itemised to aid Mrs Strachan senior select the garage in-situ effects to retain.

I suppose you could say I started the equivalent of a domestic stocktake. A journey into the unknown where I’d little idea what I’d be confronted with; other than the guarantee of being confronted by a massive spider at some point.

Sure enough, I wasn’t long into the task when, while sorting through a tea chest undisturbed since my parents moved into the property in 1989. I encountered my first huge arthropod,  Despite the spider fleeing when I moved the book it was hiding under, it was amenable and big enough to later on help me lift an old cupboard onto the drive.

I’d compare the tea chest (in which the spider was claiming squatters rights) to Pandora’s box. But as the chest was absolutely bugger all like the box, which according to Greek mythology once opened gave liberty to all the evils in the world, I won’t make that comparison……. If my mother-in-law had been freed from this vessel, the simile would have held greater accuracy.

There was far less harmful artefacts sharing tenancy with the arthropod than those that Pandora unwittingly released into the world. These included some old Ladybird books that contributed to my siblings and my fledgling reading tuition; along with an archaic set of encyclopaedias that were ancient even when I was a young child. 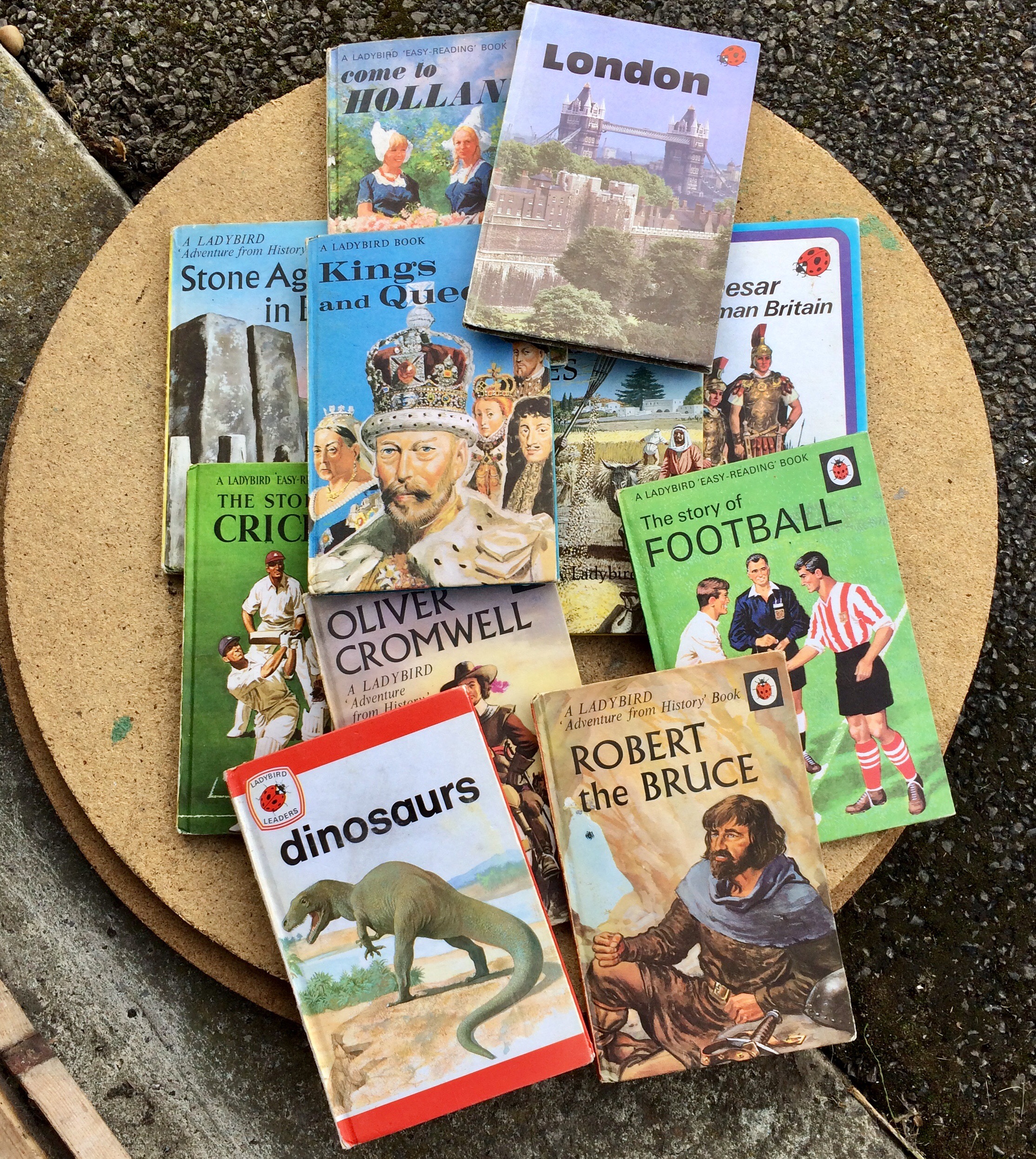 Evidently, the encyclopaedias belonged to an old uncle of my dad’s side, who found the time taken to search information in these weighty tomes exasperating. This frustration spilled over to him penning “Get your arse in gear Google. This way of finding stuff is pants!”

The tea chest also contained a commemorative plate commissioned for the wedding of Prince Charles and Lady Diana Spencer in 1981. I don’t recall who bought this little soupcon of history, or indeed if it was a gift from a family friend with a penchant for the tacky. Regardless, this plate, which was of the commemorative type peddled on the back of Sunday paper supplements, was in pristine condition despite it’s vintage. 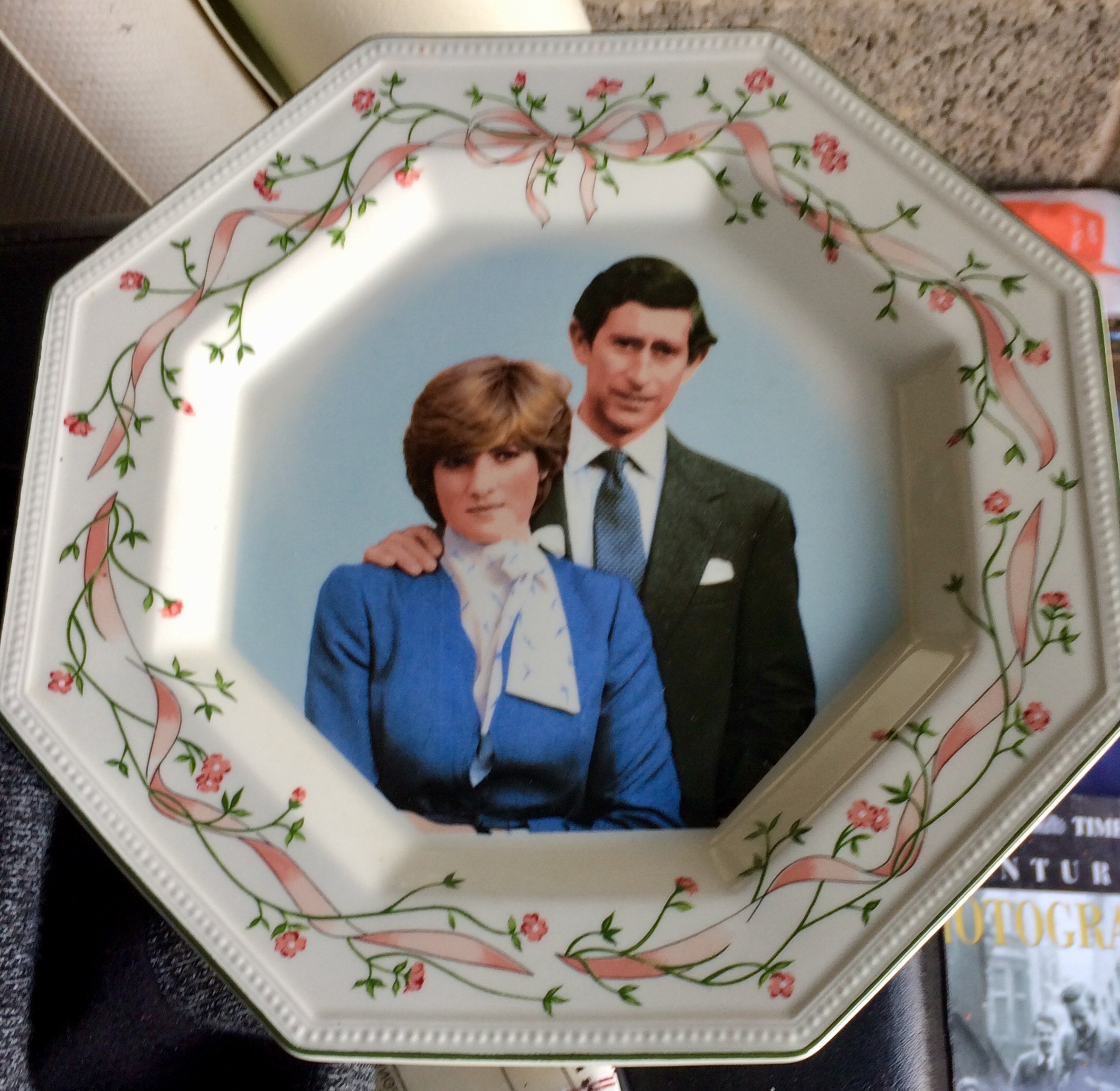 I would imagine they were mass produced, so a journey to TV’s Antique Roadshow to be told of new found wealth isn’t in the offing anytime soon. I would imagine, if the private sales were akin to how they are sold in Sunday supplements, even if I could sell it I’d be remunerated in monthly instalments and have to provide the buyer with a £10 M&S voucher.

Following, the replacing of books along with the Charles and Diana plate, I thanked the spider for his earlier assistance, before bidding him farewell and securing the tea chest lid.

My next chore on the garage uncluttering itinerary was the itemisation of garden utensils. With undertaking my father’s gardening for over a year during his illness, I wasn’t expecting too many moments of surprise at the selection of gardening tools he’d had at his disposal.

The exception to this materialised in a box of utensils I’d not previously been inquisitive enough to look in, where I found a kukri – a Nepalese knife. As I’d never seen him use this implement, I had no idea what my dad utilised this implement for, however, I suspect it’s not a memento from a clandestine stint serving with the Gurkhas.

Right, I need to conclude this and make haste. I’m off for a pint and a natter with the spider at the Bay Horse pub.