I had course to admonish myself yesterday afternoon – A consequence of becoming  disturbed at almost undertaking a truly pitiful act. A brain burp truly hammering home this middle-aged northern Englishman needs to re-evaluate his views on what constituted cool. Proof, if proof were needed, the excitement plateau on which my life currently perches is Alvin And The Chipmunks, not the rock and roll of which I aspire.

This a shameful incident causing me mutter under my breathe “Come on Arthur***….. Sort yourself out!”

*** – I was so traumatized at this thought I’d momentarily forgot my name was Gary….. Another troubling occurrence as normally when I briefly forget my name I call myself Bernard.

It all started so innocently, me standing at the bus stop on School Lane minding my own business, while attempting to make anagrams from the name of the nearby Sainsburys store.

During this sojourn to Anagramland, it dawned on me if the store had’ve been named Sainsbarys you could make ‘Sassy Brain’. If it bore the moniker Painsburys the words ‘Pussy Brain’ are attainable. I also clever sussed that if the local supermarket had been called Sockboll you’d have been able to make the word bollocks.

Anyhow, while indulging in this ludicrous wordplay, on the horizon I saw a bus heading my way. When I say horizon, I didn’t have my specs on (or contacts in) so in reality it was probably only about ten yards away.

Despite the bus being almost beside me it’s number lacked clarity. Meaning, when  tentatively outstretching my arm for it to stop, I’d no idea if it this omnibus would take me into Leeds city centre. If truth be told, I wasn’t even 100% sure it was a bus!! The vague shadow I’d just flagged down could’ve been an oversized big ice van, or a juggernaut delivering comestibles to Sockboll.

On it coming to a halt I noticed it was the X27 bus, which I’d recently learned travels the new route into Leeds from the newly opened Springs Retail Park. I boarded the gleaming omnibus, paid my fare and, after informing the driver “Did you know if Sainsburys had been named Painsburys it would have the anagram of ‘Pussy Brain’?”, took to my seat.

Being a regular user of public transport, I was delighted to learn Colton residents had acquired an extra bus. Another travel option to guide us through the scenic splendour of Crossgates, Killingbeck, Halton and East End Park as we venture into our metropolis’ epicentre. 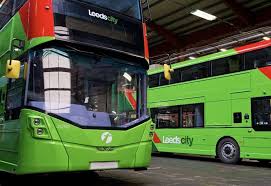 All was going well until the East End Park section of the A64 dual carriageway. It was here, with sun beaming through the vehicles new windows, my giddiness about having this extra bus route caused a disturbing brain fart.

At this point I’d the ill thought out notion to text my missus, providing her with a bulletin of exciting new developments in east Leeds public transport schedules. Reaching for the phone in my right chino pocket to execute this ‘fantastic’ idea I made an alarming discovery…… My mobile was in my left chino pocket.

Ordinarily my OCD won’t allow me to utilise my left trouser pockets on a Saturday. Leaving the conundrum of how I was going to text my wife with the earth shattering bus schedule news. Not to mention, how the heck did it get in there?!

Mercifully, it then dawned on me my excitement threshold had plummeted to depressingly low levels. Newly enlightened, I abandoned all thoughts of sharing public transport development news with the missus.

Before I close, I’d like to inform anyone whose calls and text I didn’t respond to yesterday I wasn’t ignoring you, it’s just OCD wouldn’t allow me to retrieve the phone from my pocket!!