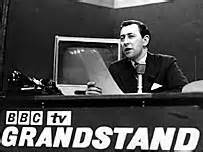 I was sad to hear the news of the passing of ‘The voice of horse racing’ Sir Peter O’Sullevan the other day, at the age of 97. He was one of a generation of great commentators from the era when I, along with millions of others, would be glued to BBC’s Grandstand on a Saturday afternoon. 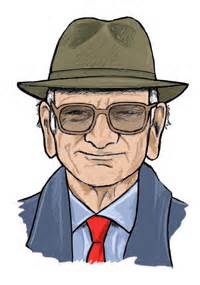 Those were the pre-Sky Sports days when the Beeb predominantly owned the rights to the “crown jewels” of televised sport in the UK.

Any sport worth watching, unless you were a big fan of ostrich racing or the European Hat Wearing Championships, was broadcast by the licence funded channel. The commercial station had World of Sport, which tried unsuccessfully compeying with the BBC’s Grandstand for Saturday afternoon viewers.

Along with the live sport Grandstand also broadcast footie highlights on Football Focus, in addition to highlights of main boxing bouts.

Not only did the BBC have the cream of the sports, they also could boast they possessed the best commentators and broadcasters of these events.

This generation of broadcasters became so much a part of the nations fabric that they became the subjects of satire on Spitting Image, impersonated on the Mike Yarwood Show or even invited to sing ‘Nothing Like A Dame’ on the Morecambe & Wise Show.

As well as O’Sullevan dulcet tones guiding us through the equine racing, Bill McLaren’s warm Scottish Borders lilt added to the experience of rugby union games and rugby league had the eccentric, distinctive voice of Eddie Waring.

in addition to this, you always felt in good hands with the knowledge, humour and calm provided by the Aussie brogue of Richie Benaud when watching the cricket. Likewise, golf with Peter West, boxing guided by the inimitable Harry Carpenter, not to mention football with David Coleman and Barry Davies.

David Coleman commentating on a legendary save in the 1970 World Cup match between England v Brazil.

I vividly remember watching the Banks save live as a young boy, while sat at home with my dad and brother. We were all astonished he keep it out. In fact my dad was so moved by it he shouted to my mum in the kitchen “Can you put the emersion on Marg please. I’m gonna get a bath later!”

ITV’s World of Sport was hosted by Dickie Davies. He had a mop of black hair with a grey streak right at the front. My dad reckoned it was natural but I always thought that it was his pet badger Trevor.

The grey streak fascinated me as a kid. I couldn’t recall seeing anyone else with hair like it at that age. It seemed to be in a different position in his hair every week. This added fuel to my badger on his head theory. As I got older I found out that, of course, it wasn’t a badger and it was his natural hair.

I’ve not seen pictures of him in his old age but I’d like to think his hair is now predominantly grey with a black streak on top. He won’t have, obviously, but it’d be great if it was the case!

Davies’ show finished in 1995, after ecologists complained about the Canadian log chopping and Dickie’s badger ran off!……………… It wasn’t a badger Gary! ………… Focus for flips sake!

Anyway, enough about World of Sport and Dickie Davies’ hair!

As I said above, I maintain a great deal of fondness for the sports and broadcasters of my youth. I still now, years after hearing them, hear their distinctive commentary voices in my head!………………. It brings a smile to my face thinking about it now. Although, I wish Eddie Waring would stop telling me to kill people!!

David Coleman probably added the most memories to the tapestry of my life at that time. Predominantly from his football commentary in the early 1970’s when Leeds United were in their pomp and majesty. One of my favourite childhood memories is when he exclaimed “Clarke. One nil!” after Leeds’ Allan Clarke headed the winning goal, against Arsenal, in the 1972 FA Cup Final.

Those three words, along with the monochrome TV pictures that accompanied them, are indelibly filed in the ‘Good Times’ folder in my cranial database.

Coleman eventually stopped football commentating and predominantly took up the role as an athletics broadcaster. He added to the televisual experience with his enthusiasm and passion for the action that was unfolding in front of him. He did get a bit over enthusiastic at times, which was portrayed below by a satirical show Spitting Image.

He also had the reputation to make the odd blooper. In fact he became so famous for them, a book with a compilation of commentating gaffs was published named Colemansballs.