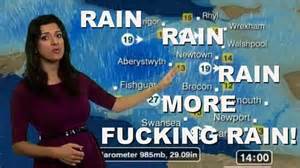 Today is the birthday of former BBC weatherman Ian McCaskill. In the 1980’s and 1990’s, before the days of the latest technological advances in meteorology, the eccentric McCaskill used fortune cookies and complete guess work to predict the next days weather.

His was an era when weather presenters were employed on meteorological knowledge and presentation skills, not how attractive they were. If you looked like a clumsy beekeeper in those days it didn’t matter! As long as you knew your Cumulus from your Nimbrostratus clouds and were able to communicate effectively you were in.

He and his colleagues didn’t have access to the state of the art Met Office hardware and software that allows today’s presenters to forecast far more accuracy. Not that they really need a computer to tell the viewers it’s going to rain tomorrow..Without any meteorological training you could stand in front of the camera, say its going to throw it down with rain and chances are you’d forecast correctly.

McCaskill must watch on in envy knowing that Lucy Versamy doesn’t have to rely on her bunions, or Carol Kirkwood doesn’t need to analyse how low the crows are nesting to predict any up and coming precipitation.

The easy on the eye Lucy Versamy, relieved she doesn’t now have to rely on her bunions……….. I was unable to find any pictures of the bunions! 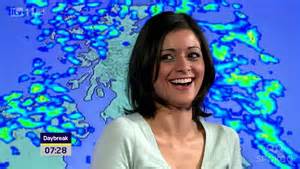 McCaskill was an endearing Scotsman who didn’t let the delivery of a bad weather forecast, or the fact colleague John Kettley had put Fiery Jack ointment in his undies, dampen his boundless enthusiasm.

He was never without a smile when delivering his meteorological predictions, although that could have been a pained look resultant from the Fiery Jack in his undies!

Here is McCaskill giving his long term forecast for the UK……

Regardless of the accuracy of the fortune cookies or his guess work, McCaskill’s joviality seemed to get him an easy ride from the viewers. Even the brashness of his catchphrase of “It’s gonna piss it down in Manchester!” couldn’t dent his popularity!…………… Well, apart from with the citizens of Manchester.

After his retirement in 1998 he was given the Freedom of Queens Park. McCaskill couldn’t hide his elation at receiving this accolade. This meant he had the freedom to stroll the grounds of Queens Park, in his home town of Glasgow, at his leisure.

He graciously accepted the award in a ceremony at Partick Scout Hut. However, the shine was taken off it somewhat, when he later found out anyone can stroll the grounds of Queens Park free of charge!

McCaskill’s distinctive and eccentric delivery made him an easy target for mimics. He was widely parodied in the satirical puppet show Spitting Image. He took this satire well, although he was unable to provide an alibi when mimic Rory Bremner’s ferret disappeared mysteriously!

Additionally, he received a mention in the Sunderland band Tribe of Toffs 1988 novelty record John Kettley Is A Weatherman. This was widely acclaimed to be the best song ever to be written about a Todmorden meteorologist………… Although, saying that it’s the only one, I believe!

On the subject of parodying weather forecasts, I have to say that I’ve found the most accurate site for predicting the weather is this account I follow on Twitter! …………. Tell it as it is! 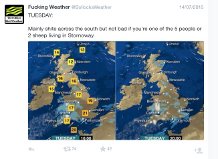 All it remains for me to say is Happy Birthday Ian and when do the fortune cookies predict this flipping rain will stop?!