At the end of my first blog on my road trip around Scotland, I had reached the picturesque Aberdeenshire village of Strachan. This bewitching part of north east Scotland is where my surname originated centuries ago and was the reason I’d travelled over 300 miles from my home in England.

After checking in to the recently reopened Feughside Inn  with its white façade that brightly reflected the early afternoon sun, I was pleased to see that I’d been allocated a room overlooking the River Feugh with a panoramic view of Mount O’Cairns, where I’d visited earlier.

The view from my bedroom….

They say that beauty is only skin deep. Well if that’s the case, what I was now admiring, through my bedroom window, had skin like a veritable rhino! …. Oh, and my mother-in-law must have been born inside out! (only kidding, or am I?!)

I scoffed my very average cheese and tomato sandwich, previously purchased at an Angus service station whilst driving up north, grabbed my camera and headed out towards the nearby town of Banchory.

In Banchory, I briefly visited a friend who was busy helping out in a charity shop. During our relatively short chat she kindly invited me to join her family and friends that evening for a meal. Such a convivial Scottish welcome, from someone I barely knew, was heart warming and refreshing!

I knew Linda from some of the work she undertakes as part of one of the Strachan groups on Facebook. I bode her farewell until the evening, as the charity shop was busy and she was needed.

I then had a short walk down Dee Street to wander around the aesthetically pleasing grounds of Banchory Lodge on the banks of the River Dee.

Pictures of Banchory Lodge with its stunning grounds …… 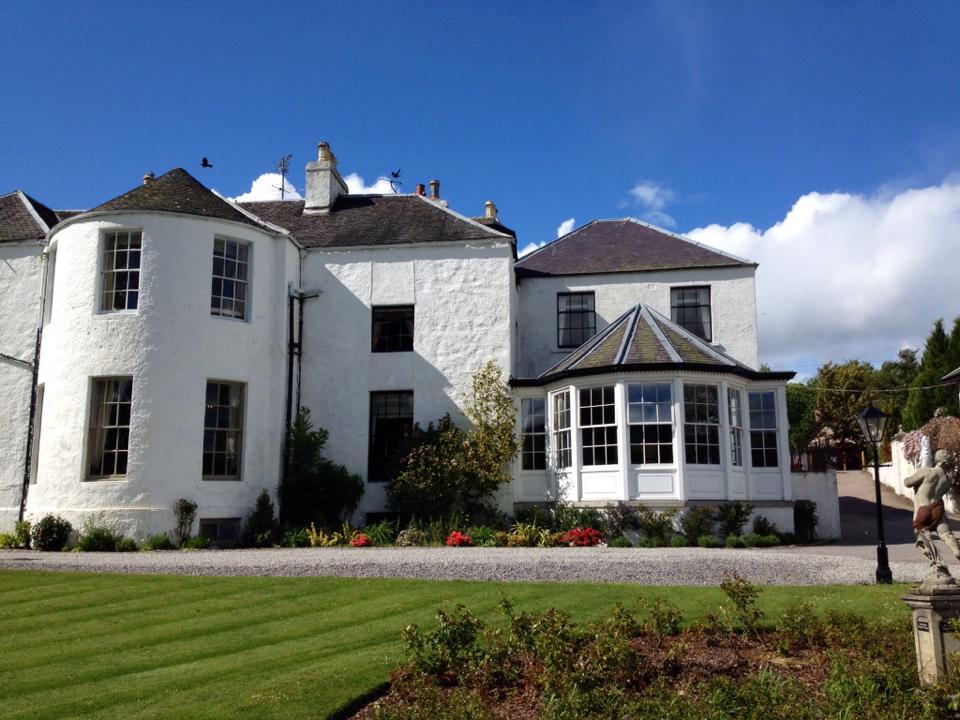 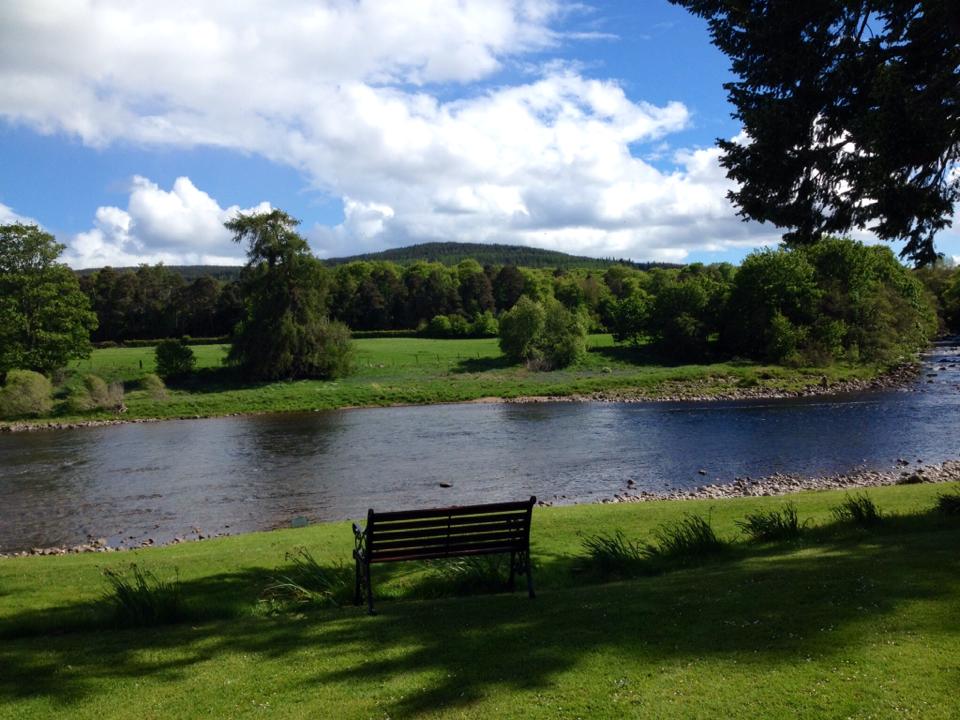 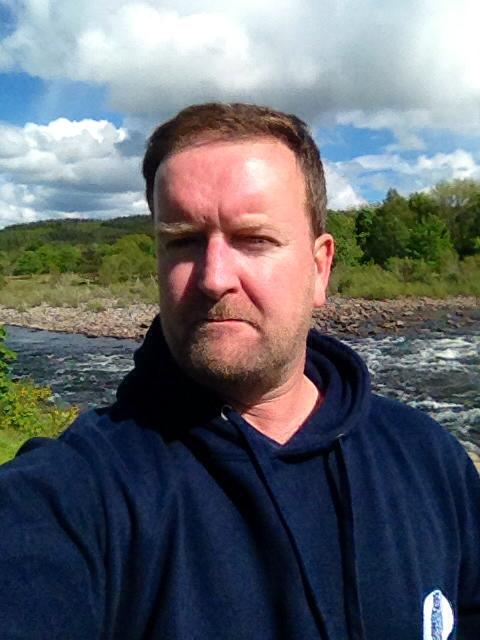 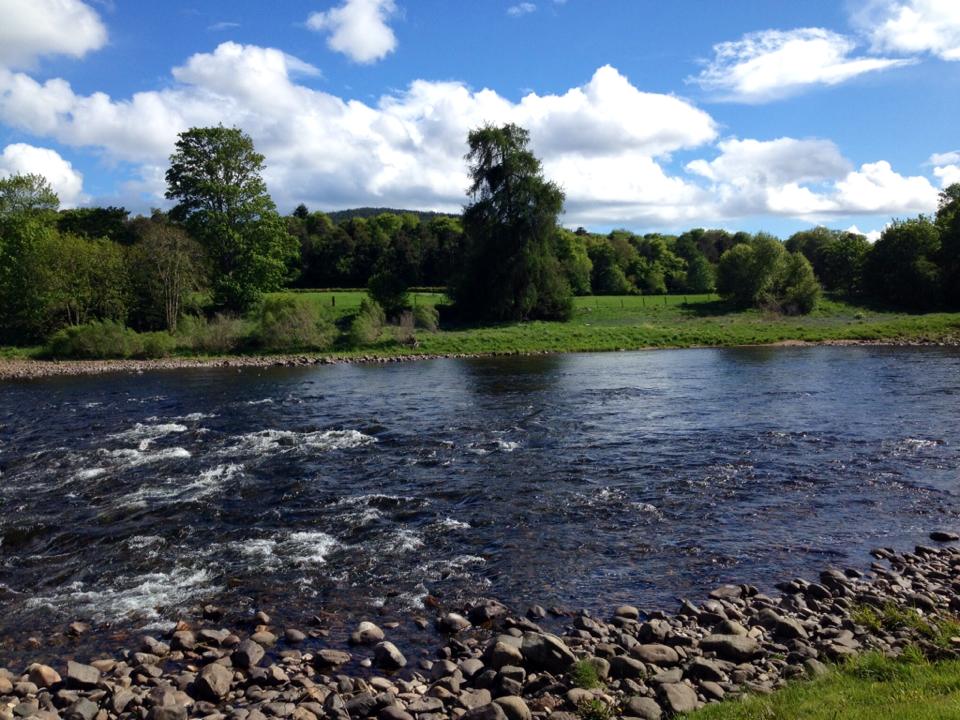 I took several pictures here of the well kempt lawns, tree lined paths and the rushing shallow current of the Dee. Halfway across the river a guy was fly fishing in his wading boots. He told me he hadn’t caught any fish, but had caught several flies! …. That will teach him not to keep his mouth open when fishing!

The Lodge itself was a recently re-furbished Georgian Listed building. Like the Feughside Inn it had a striking white façade, but was far grander than its rival in the next village.

After a while of absorbing such charming scenery, snapping away on my camera like a demented paparazzi, I headed back towards my overworked motor in the car park, behind Dee Street.

Prior to the short drive back to Strachan, I stopped at the Deeside Drinks Emporium to purchase wine for tonight’s hostess as a thank you for my cordial invite (for an evening meal.)  There is a joke in there somewhere that I should have taken cordial, not wine, as I’d had a cordial invite. However, it isn’t a good one so I wont go there! … Although, I think I possibly just have!

I arrived at Linda’s at around 7pm, where her family and friends had already congregated. Her house, with splendid views of Mount o’Cairns and its adjacent hills, was on a quiet winding street set back off the main road through Strachan village.

She cooked an impressive and very appetising three course meal, including home made pate, Chicken Caledonian, and a rhubarb trifle. Her friends Linda and Ron, like her family had a wealth of interesting tales, that added to the already convivial evening!

With my poor memory, the fact that both women were called Linda meant that at least I should remember the people’s names at the dinner …. Well the women anyway!

After dinner we retired to embrace the majestic views. Whilst the sun elegantly set behind the hills of the Western Grampians, we chatted about Linda’s role within the Strachan clan group and tales of members she had met.

Enriched with good food and chat I returned back to my hotel, ready for some shut eye before day three of my trip to Aberdeen.

Foolishly, I’d lost track of time and with it being after 11pm the front door of the hotel was locked on my return. As I was bereft of a key, this necessitated me banging on the door to try and get attract the proprietors attention, much in the way Fred Flintstone does in the closing credits of the Hanna-Barbera cartoon ‘The Flintstones’! Unlike Fred, I resisted shouting “Wilma!” as I knocked on the door!

Me attempting to get back into the hotel after 11 pm!!… 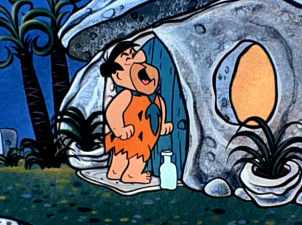 My knocks were soon answered and I retired to my comfortable bed listening to what sounded like the distant roar of a lion. Although, I suspect it was just the guy in the adjacent room snoring!

After the splendid meal at Linda’s the previous evening, a light breakfast was called for so I only had tea and toast.

I eventually left the ‘Feughside Inn’ heading towards Aberdeen at around 9.30 am. I tried to be smart and instead of entering Aberdeen I punched in its nickname of the ‘Granite City’….. Unfortunately, I was distracted whilst doing so and entered the ‘Emerald City’ in error. I didn’t realise my mistake until the GPS had taken me half way to Oz!

Anyway, it was not long until I was back on track. Though, I decided to re-route slightly after a recommendation that I visit Castle Dunnottar at Stonehaven, some twenty miles south of Aberdeen ……………… Thanks for the tip Tin Man!

Dunnottar Castle is a dramatic and evocative ruined cliff top fortress in a truly stunning setting overlooking the North Sea. If anyone thinks that description is overly gushy get in touch with the castle official website, as I stole it from them. To clarify I don’t normally plagiarize words from other sites, although I do get pictures from some search engines! But the official website does get its description pretty spot on!

I enclose some of the pictures I took whilst there (below), so you can make your own mind up! The surviving buildings are believed to have been built in the 15th and 16th centuries, with the initial fortification taking place in the early middle ages.

Some of the pictures I took at Dunnottar Castle … 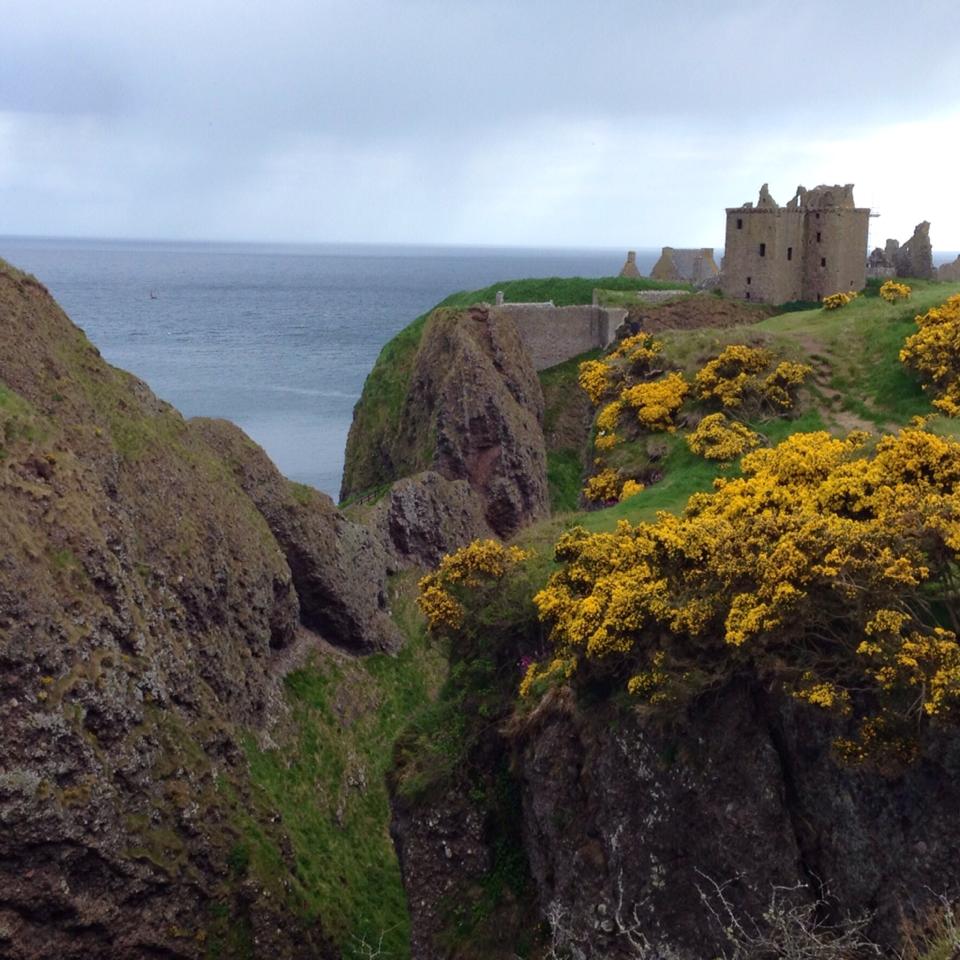 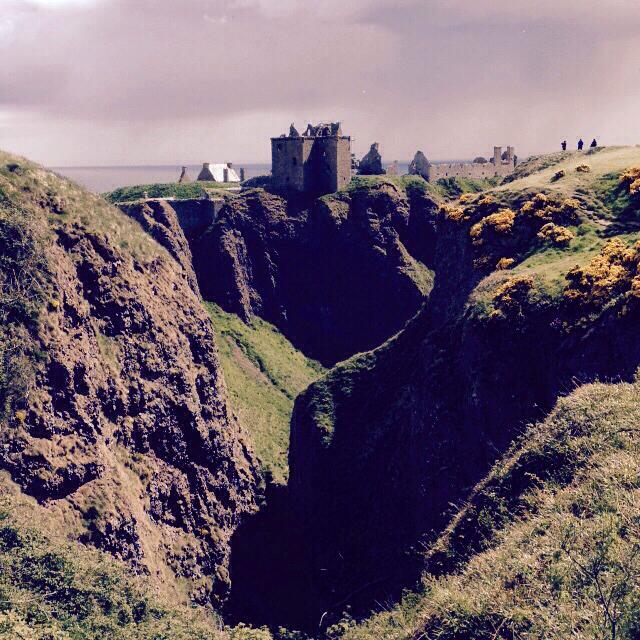 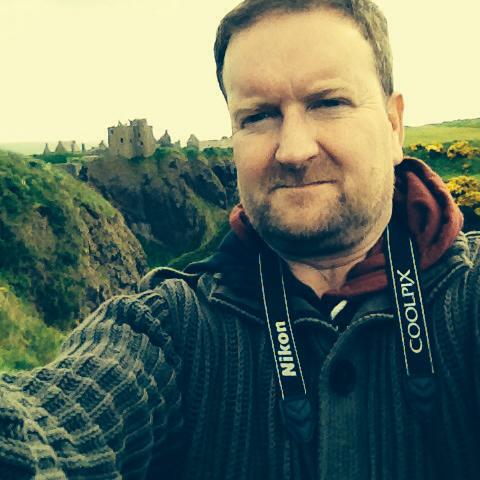 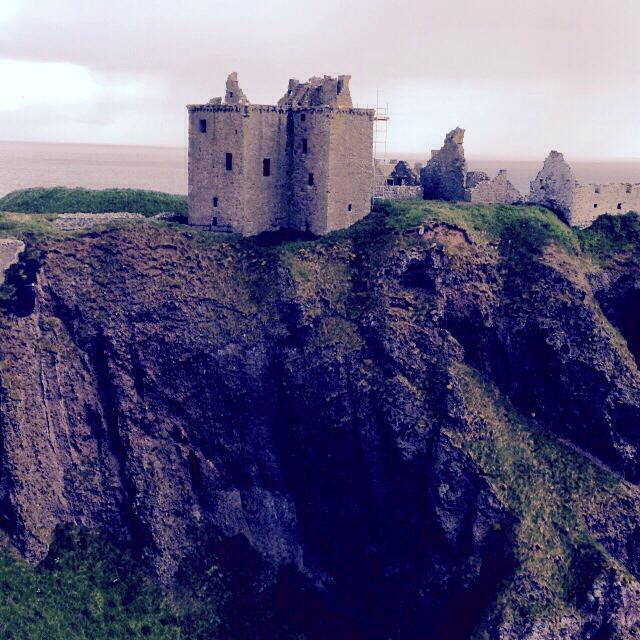 William Wallace, Mary Queen of Scots, the Marquis of Montrose and the future King Charles II, all graced the Castle with their presence. Most famously though, it was at Dunnottar Castle that a small garrison held out against the might of Cromwell’s army for eight months and saved the Scottish Crown Jewels, the ‘Honours of Scotland’, from destruction. Crown, sceptre and sword now take pride of place in Edinburgh Castle.

Anyway, I spent an hour or two there taking a copious number of photographs and standing in awe of how they originally built these structures, on such unforgiving terrain.

I will close this blog now as I’ve waffled on long enough. Additionally, the sun is out and I don’t want to miss out on this rare English occurrence!
I will complete my trilogy of blogs on my road trip to Strachan shortly. This will include my visit to Aberdeen, a hair raising journey back to Strachan in torrential hailstones and a stop over in Glasgow!