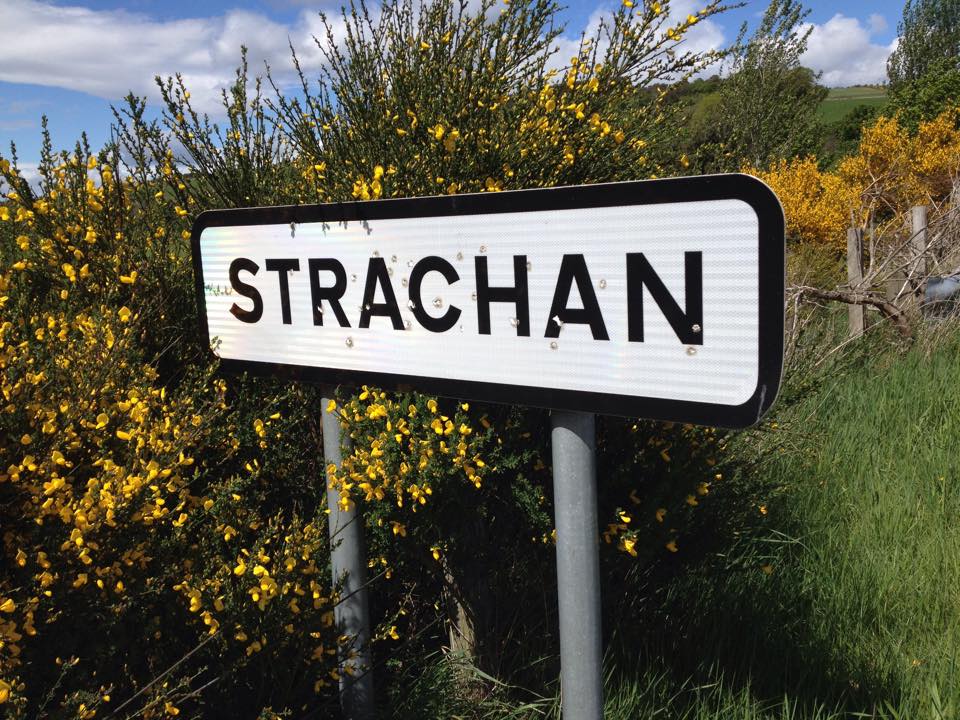 It was with a tinge of excitement I punched in the post code of my Edinburgh hotel into my Sat Nav (GPS), as I sat on my driveway in my trusty black Astra. The excitement wasn’t because I was sat in the Astra, moreover thinking off the road trip to Scotland I was about to embark on!

The main objective for my road trip was to explore the origins of my surname , perhaps even meet some ancestors by visiting the village of Strachan, Aberdeenshire.

I was travelling alone on this 800 mile round trip from my home in Yorkshire, England. My intinery also included a one night stop in Edinburgh, two nights in Strachan and my final night in Glasgow!

To my surprise the two hundred mile drive from my home was exceedingly quiet. The rumble of tyres on the A1, the sound of the woman’s voice on my GPS system and an eclectic mix of music on my ipod were my only companions.

The GPS gave me an ETA of three hours for the first leg of my trip to Edinburgh. That wasn’t taking into account of course ( at my age ) the extra thirty minutes one needs to allow for those bathroom breaks ….. Hey we all gotta go!

The GPS woman was very pleasant. She was full of interesting anecdotes: such as the day a man took the wrong turn in Berwick and how many speed cameras adorn the A1 near Dunbar. She spoke with a tinge of sadness about her husband leaving her for the women who is the French translation on the GPS system! She was fiercely proud of her offspring and showed me photos. I remarked how much they looked like her, before returning my gaze to the road, At this point I was thinking I probably best stop for a break, as I was starting to hallucinate!

Crossing over the border into Scotland….. 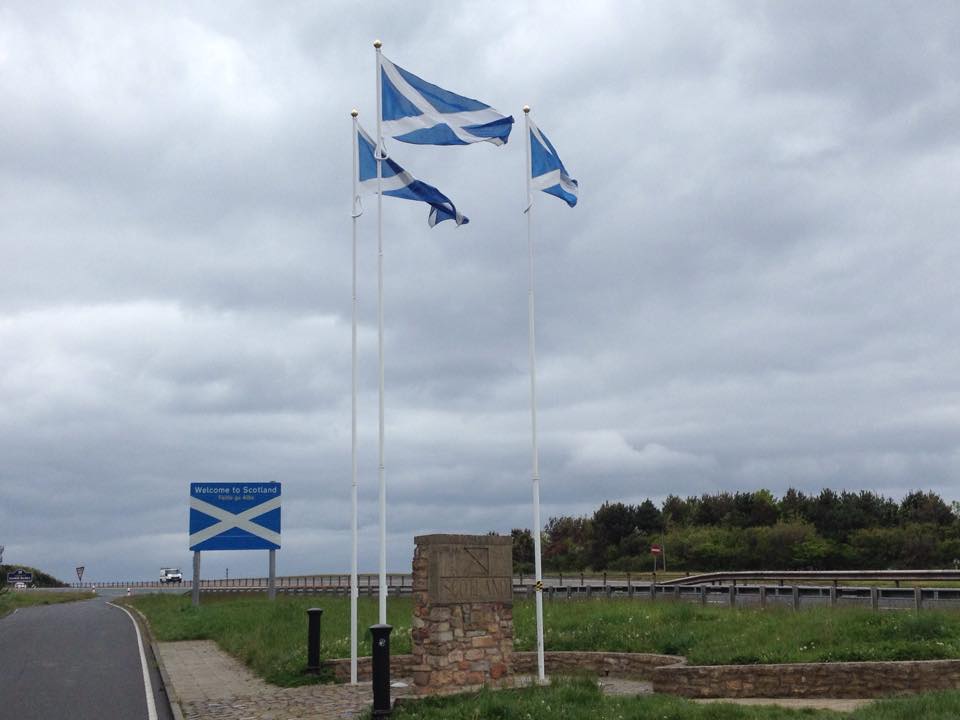 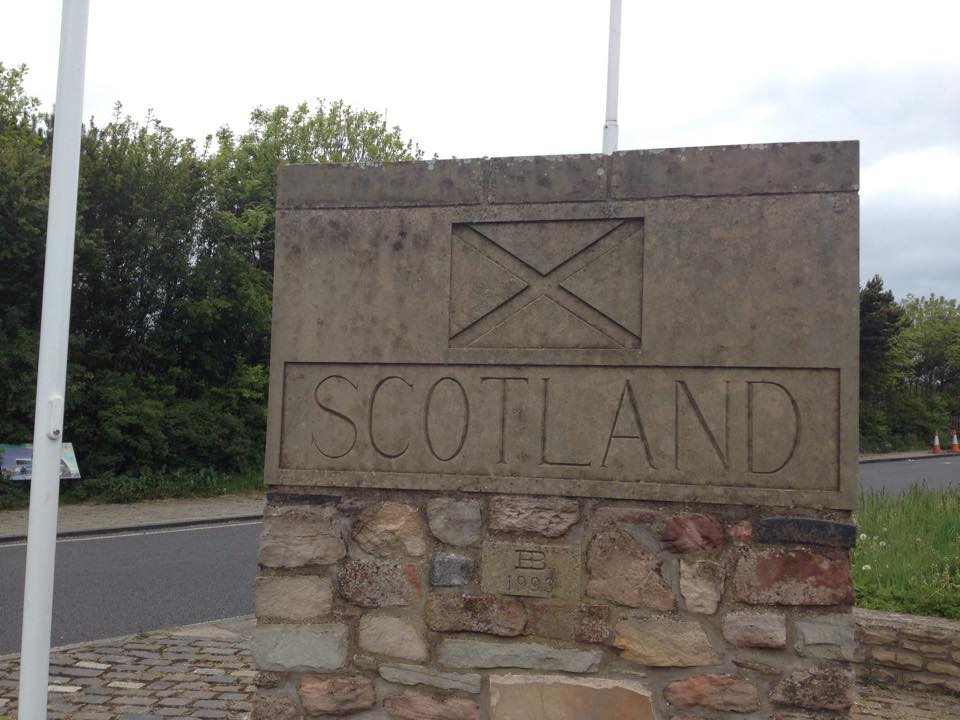 On my arrival in Edinburgh, I parked up at my hotel just as the heavens opened, After checking into the Premier Inn where I was a guest, I had intended to go into the city, but having experienced the sights of this historic metropolis many times, I decided not to brave the torrential downpour outside. Instead, I made my way to the hotel bar, ordered a pint of beer and sat with my laptop to draft a blog for my website garystrachan63.com .

In my boredom and whilst I sought inspiration for my blog, I had a game of guessing the occupation of the smattering of patrons in the bar! I’m pretty sure the big, dust covered guy quaffing Guinness, sat at an adjacent table was a bricklayer…….. After all, I couldn’t think of any other reason he would have brought a bricklayers hod into a bar with him!

Sat at another table was a guy whom I suspected, with his airs and graces and the weird taboo hairdo, was a hairdresser. I don’t like stereotypes so I’m not basing my assumption on the fact he was overtly camp, or that he smelt of Vidal Sassoon shampoo and conditioner……….. It’s was more ‘It’s a Hairdresser Thing… You wouldn’t understand!’ t-shirt he donned that was the giveaway!

The very fact I’d reduced myself to this, re-affirmed my earlier thoughts of whether travelling alone had been such a good idea after all! So I stopped the guessing game having come to the conclusion it really was rather absurd! …… That and the fact the guy with the hairdresser t-shirt had finished his drink and left with the bricklayers hod, proving my assumption to be wrong! ….. It just shows you not to judge a book by its cover!

After a quiet evening meal at the hotel, where I realised that eating pork ribs with barbeque sauce and beards wasn’t a partnership made in heaven; I finished my beer and headed to bed for an early night!

In the restaurant the next morning, I plumped for a cooked meal to set me up for the day, I asked the waitress for a full English breakfast, forgetting briefly where I was. As she stood there smirking at my gaff, I quickly rectified my request to a full Scottish breakfast hoping that this Sassenach hadn’t offended her!

So what’s the difference between a full English breakfast & the full Scottish I hear you ponder? From my experience there isn’t much at all! The Scottish version is really just a full English without the superiority complex! … Before I get slated for disloyalty to England, that was just a joke……. Anyway, I digress!

At around 9.15.a.m, having breakfasted, packed my car and reset the faithful GPS I set off for the next stage of my trip, the 120 mile journey north to my ancestral home. The journey was pleasant on the almost empty roads. In fact it was so relaxing the GPS woman nodded off! When she started snoring around Dundee, I was beginning to understand why her husband had left!

This trek was certainly made more bearable with the panoramic scenery of sweeping forests, woodland, hills and other picturesque associated flora and fauna. Not too far from Montrose the GPS woman woke up and furnished me with further anecdotes. These included what surprising thing TV host Piers Morgan does when he’s driving! …. Although, taking into account what most people call him, it perhaps wasn’t that much of a surprise!

The highlight of the journey on day two of my trip, apart from my arrival, was the last fifteen miles or so from Fettercairn to Strachan. This involved a steep winding drive  up to the peak of Mount O’Cairn, with its spectacular views of the Cairngorms to the west. When snow arrives, Mount O’Cairn road is renowned for being one of the first roads to be closed, as well as the last to open. Looking at how exposed this peak is, it’s not hard to see why! 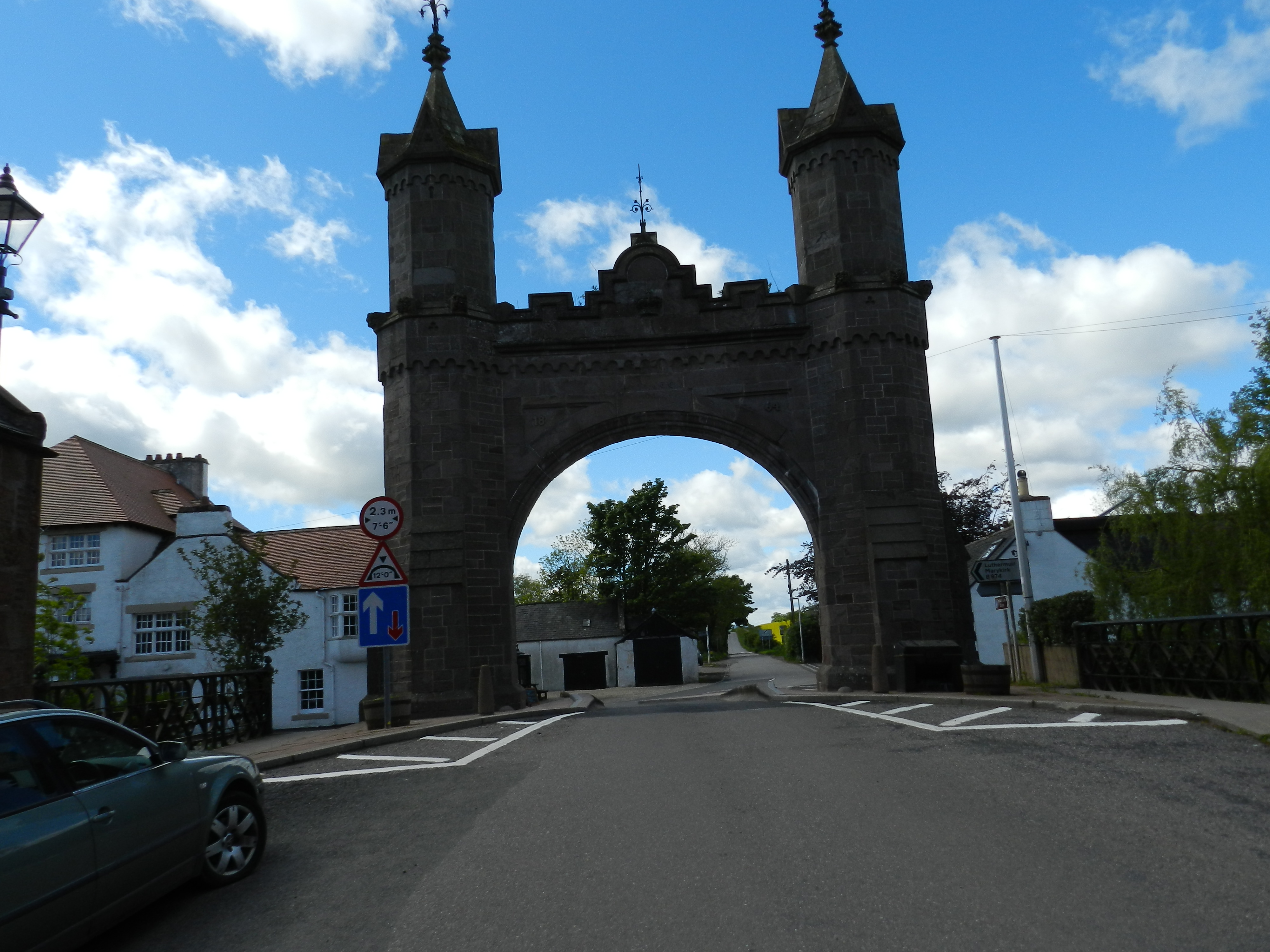 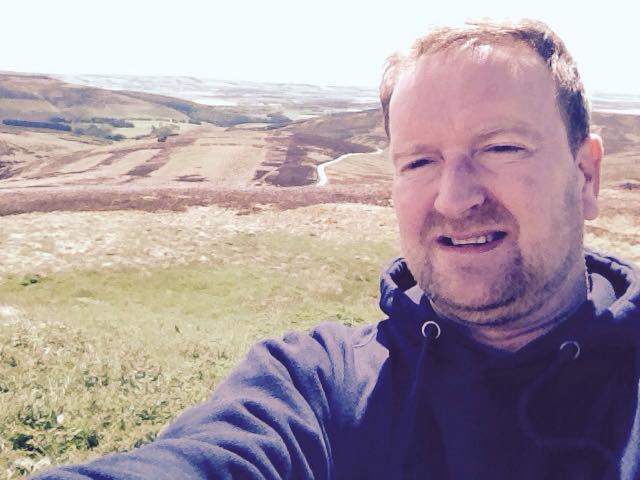 This fifteen mile journey took me around an hour. I more than doubled the expected time for this stretch by regularly stopping to take photographs at the seemingly endless sights of interest en route. 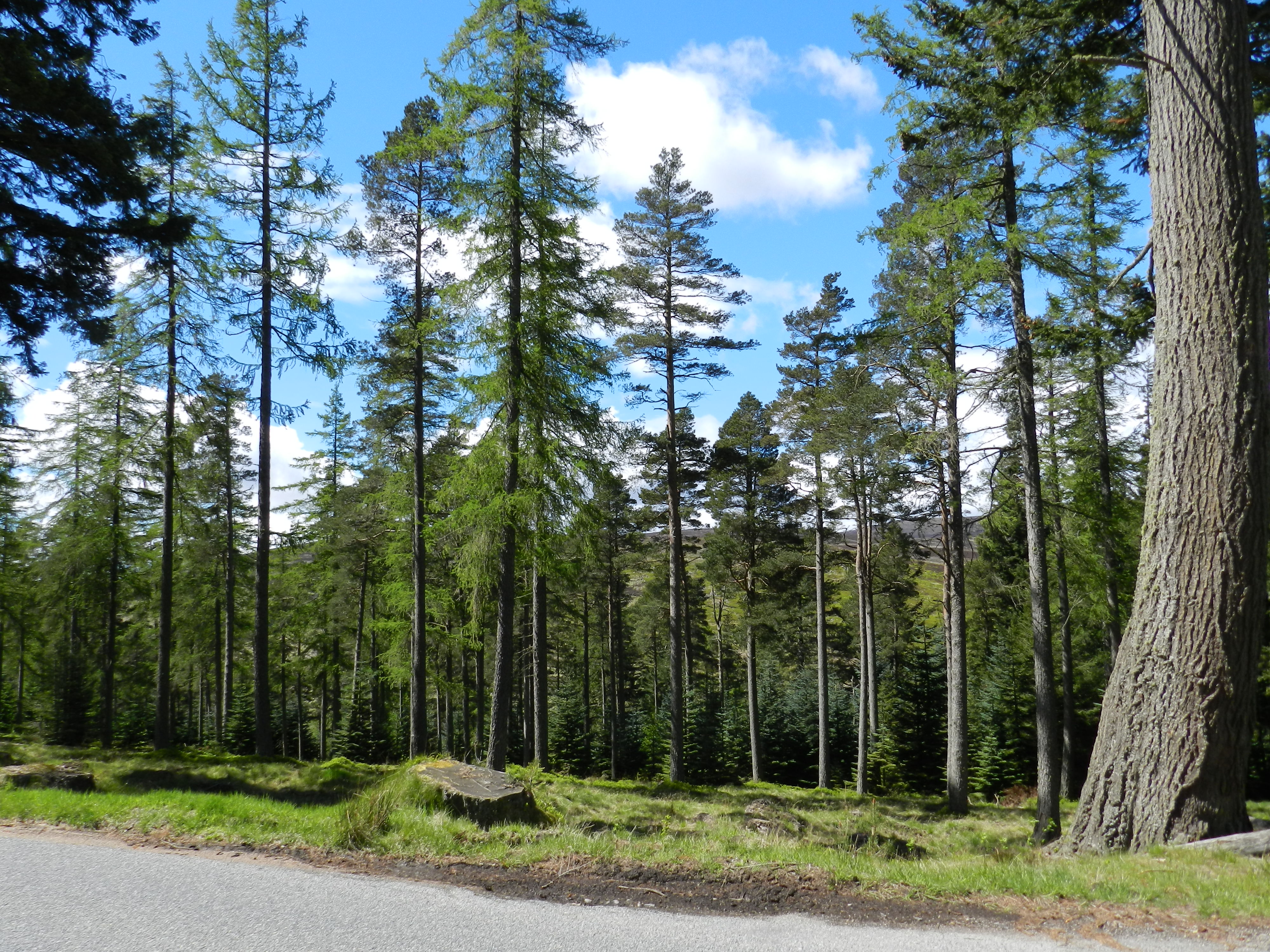 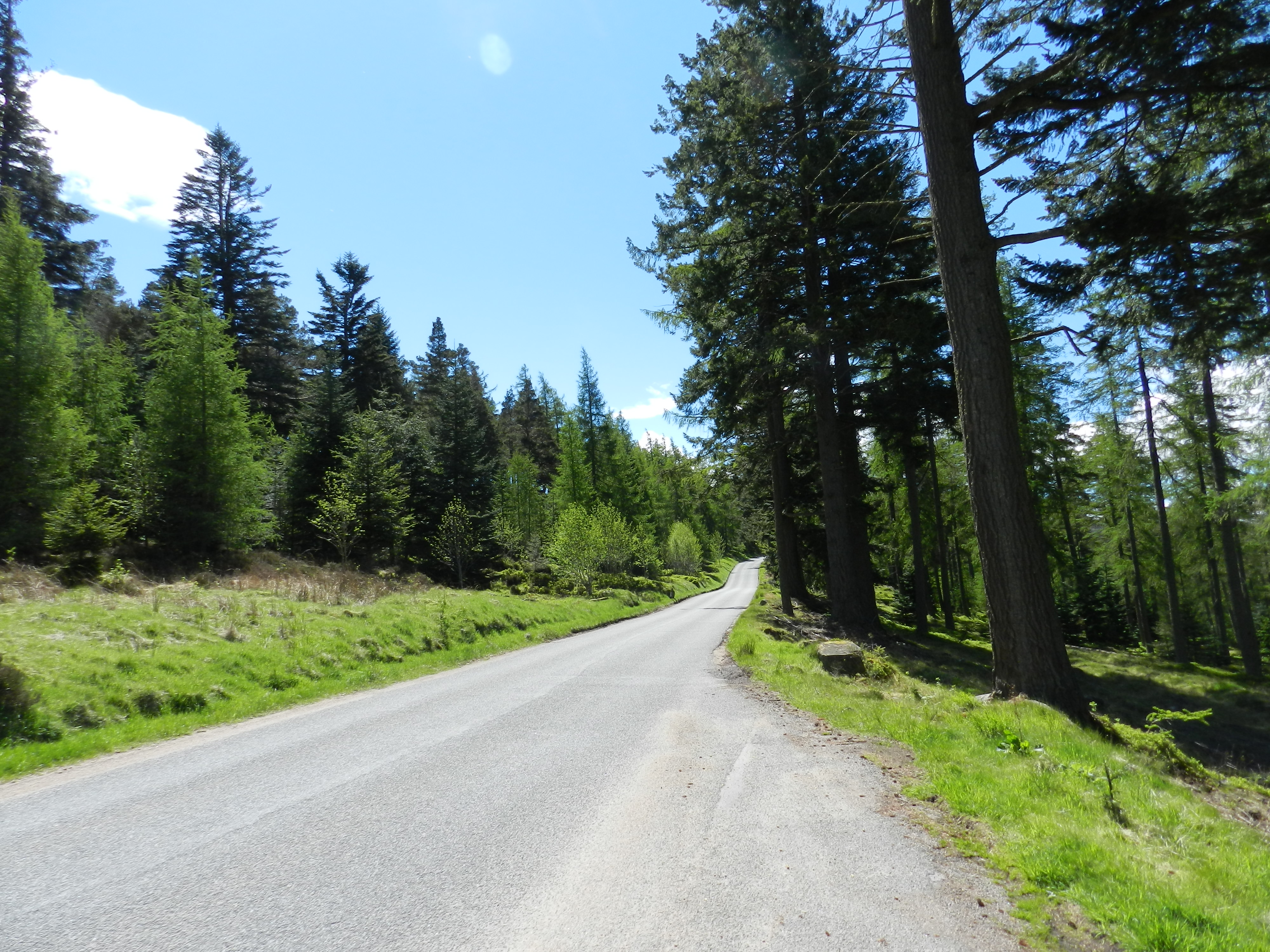 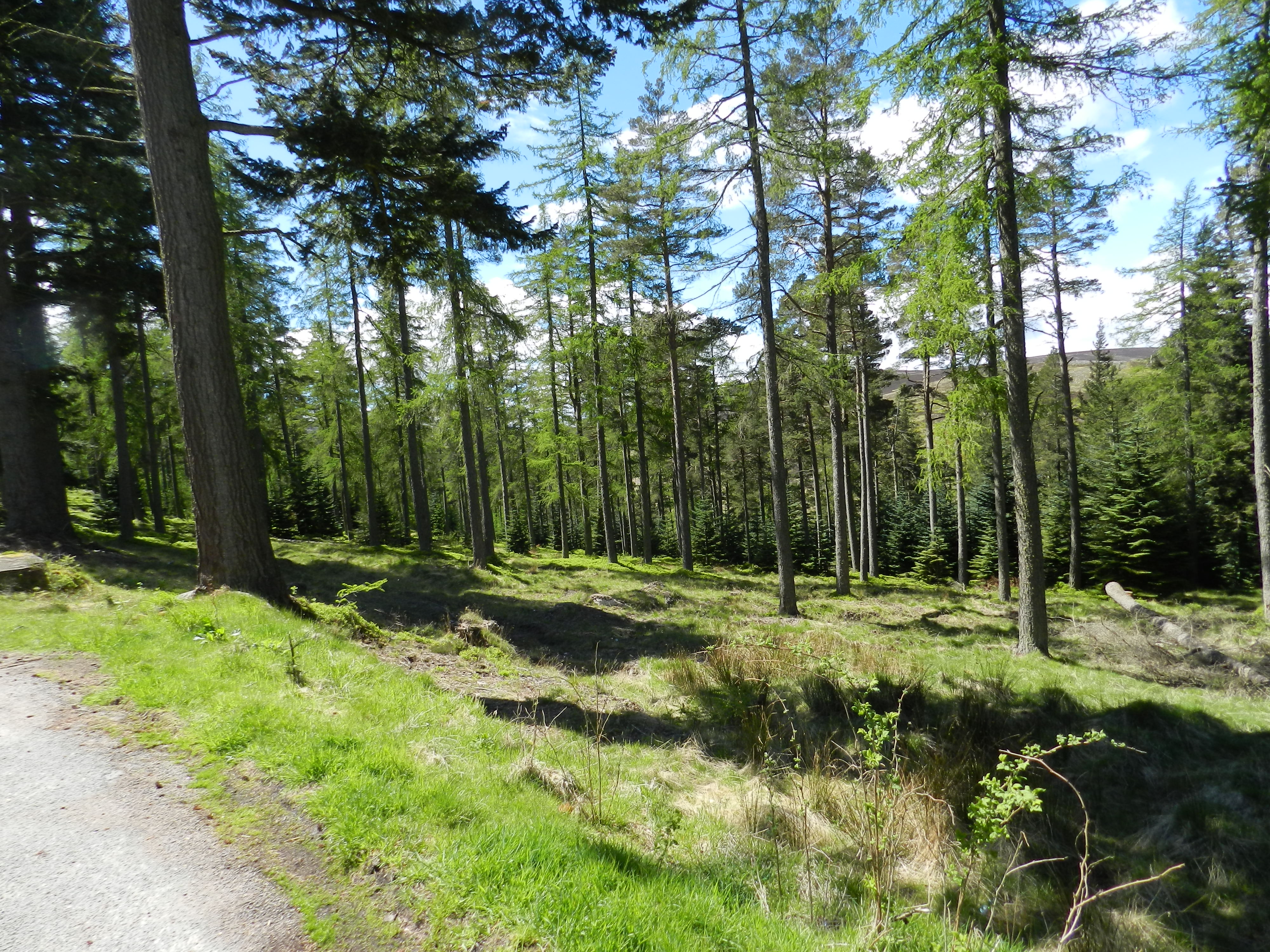 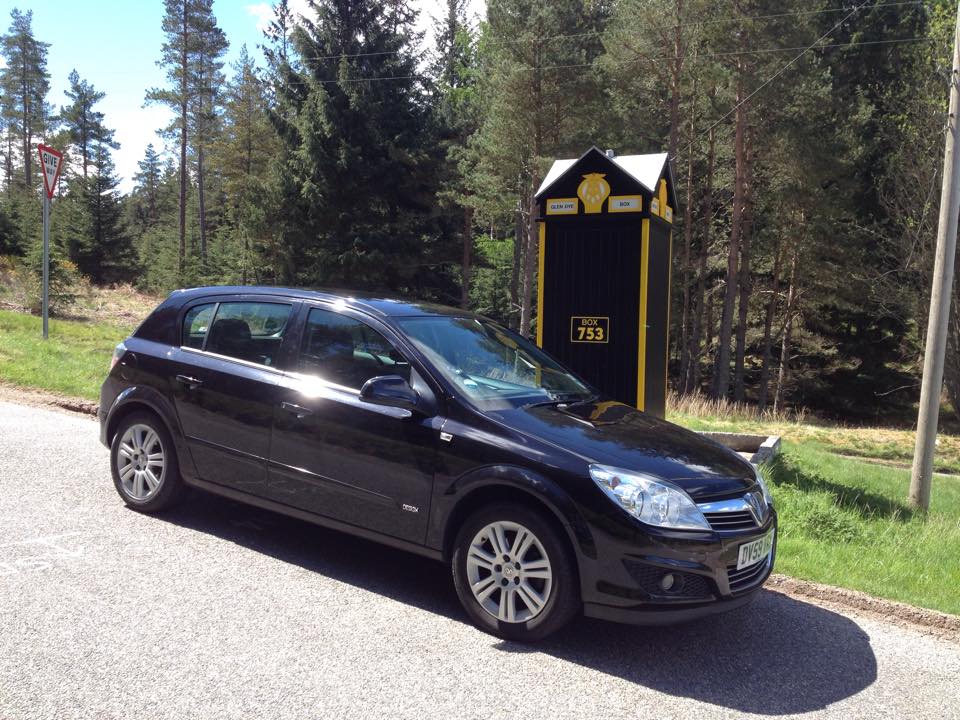 As my GPS system counted down the miles to Strachan, on this sunny late May afternoon, my excitement rose at the thought of treading the ground of my forefathers. My head spun with thoughts of the style of buildings I would encounter; how would I pronounce my surname (Strakhan as usual or Strawn as the village was called) and could it be possibly true that Morrison’s supermarket in Banchory had a two for one offer on Muller yoghurts?!

All those questions would soon be answered but not until I’d taken several photographs of one of ‘Strachan’ road signs welcoming visitors to this small, but perfectly formed, village.

‘Strachan’ road sign photographs completed, I proceeded on the winding road to the village, which came to a stop at a T-junction. A right turn would have taken me on the road to the town of Banchory, three miles away. The left turn, which I chose, took me into the village. It soon became clear the old granite grey terrace cottages, that I’d envisaged would adorn this Aberdeenshire community, weren’t the predominant type of abode. It has its share of older structures, such as the school and hall, however, I was surprised to see the number of more recently built houses. My initial impression was that it portrayed an image of well maintained affluence.

I pondered whether this affluence is from middle classes who have made their money from the oil industry in nearby Aberdeen, or whether it is locals who snap up these properties. I don’t know definitively but I concluded it’s probably a mixture of the two.

So around 2pm on 28th May 2015, I was in the village, beside the rivers (the Feugh and the Dee), and amongst the undulating green land previously trod by my forefathers. One of the things that struck me was that due to the nature of this predominantly unspoilt land, there would be large parts of this terrain that hadn’t changed in hundreds of years.

I checked in at the recently re-opened Feughside Inn. This was an agreeable, pleasant and hospitable base for exploring the area, around two miles out of Strachan village itself. I inexplicably pronounced my surname Strawn for the first time ever as I checked in, and retired to my room for a sandwich and set up wifi on my iPad.

I cannot be sure of what exactly my ancestors did undertake in this beautiful area hundreds of years ago. However, I can confidently say they wouldn’t have eaten cheese and tomato on rye, or ever messed around setting up wifi to find their way to Morrison’s at Banchory, a castle at Stonehaven or the RSPB sanctuary at Crowton!

I will conclude this blog now as a clan member has nodded off in Wichita, Kansas! I intend to write further of my trip in my another blog in the next day or two.

In the next instalment I will provide details of Banchory, dinner at a friends in Strachan, trips to Donnattar Castle, Aberdeen and Glasgow; not to mention the riveting tale of when I thought I’d driven home without my beard trimmer! …… Although, I’ll probably leave that out!

The Feughside Inn where I stayed and some of the buildings in Strachan.. 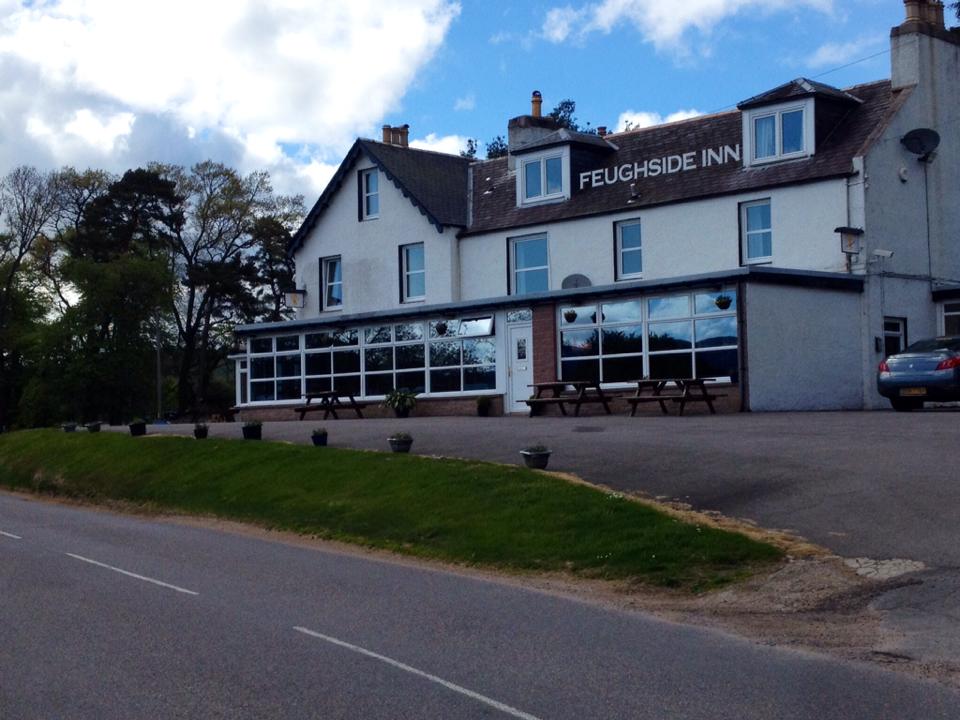 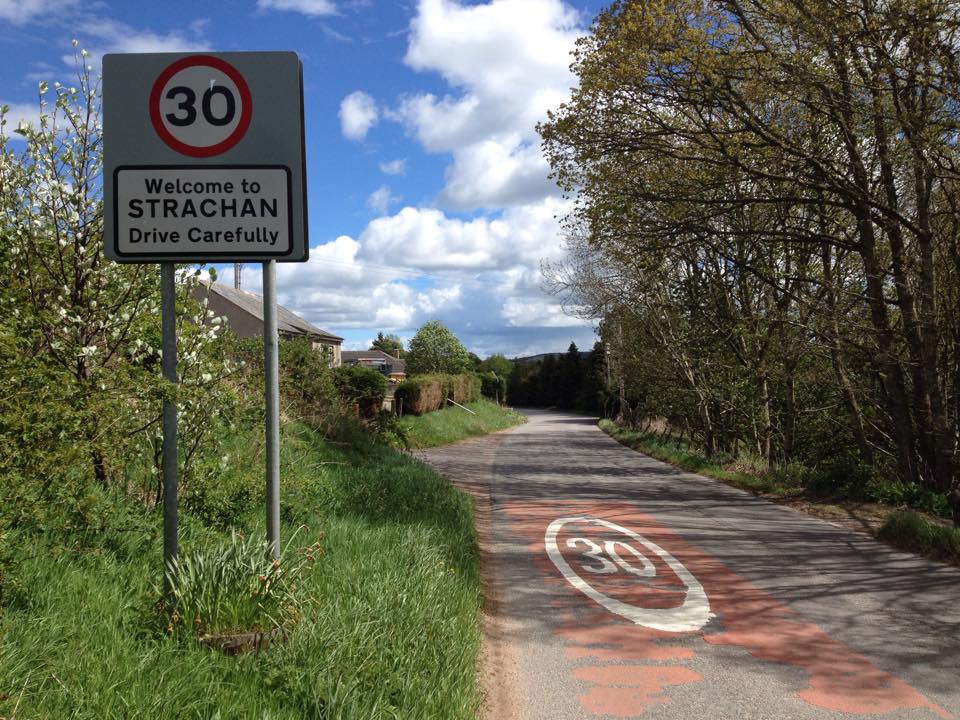 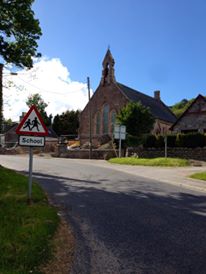 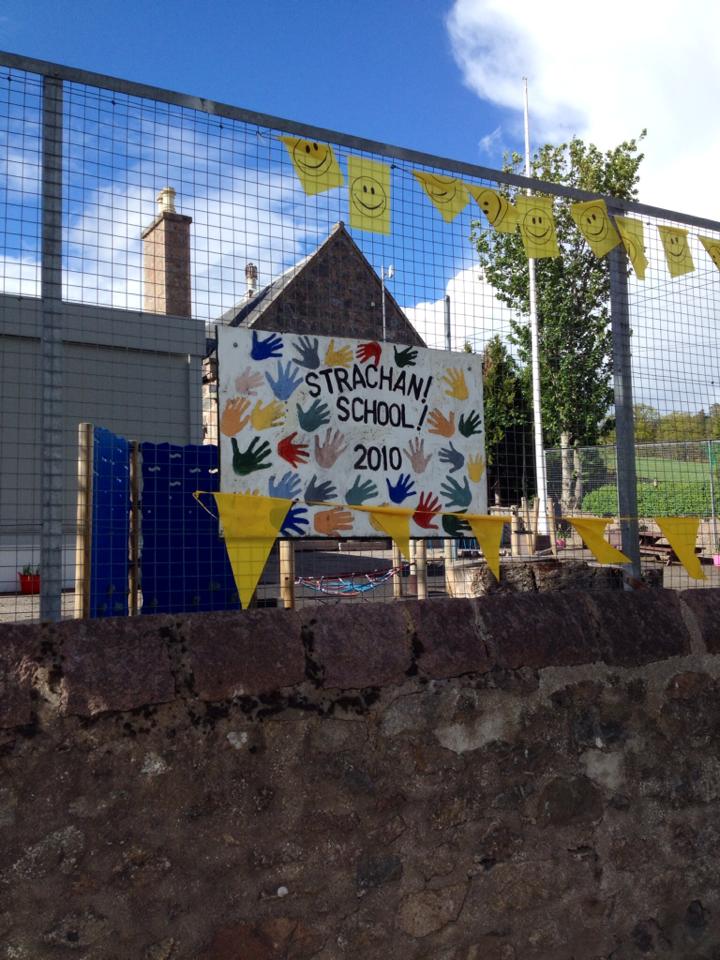