Well week commencing 13th April appeared around nine hours ago. It sneaked in with stealth, anonymity and with a touch of melancholy.

How has this new house guest changed my life?

Well it has to be said not a great deal so far, apart from running off all my hot water and eating my Weetabix…… Although, thinking about it, it ‘s more likely my daughter Rachel’s twenty minute shower deprived me of warm water …… Not to mention her twenty minute breakfast that accounted for the Weetabix!

One thing that definitely hasn’t change is my ability to get a good nights sleep. The arrival of this new week sees insomnia maintaining an unwelcome profile in the life of GJ Strachan.

I unsuccessfully attempted to remedy this by adopting the cliched old wives remedy of counting sheep. However, that just left me with a room littered with sheep droppings. Getting them out of the house also proved problematic.

As I haven’t got a sheep dog I ended up having to use the neighbour’s cat to round them up…….. Not an ideal approach, but needs must and all that.

A friend recommended, via message, fighting my capricious sleep pattern by eating a banana. Unfortunately, I misread it and nearly choked to death trying to ingest a bandana!

Yesterday afternoon an acquaintance (who I shall name Frank) was in a stressed state after mislaying his lucky underpants.

Evidently, he rang the Samaritans but they were unable to assist. He just got more down listening to the on hold music. Perhaps, they should revisit the idea of having Terry Jacks melancholic tune Seasons in the Sun as their on hold music.

I was intrigued to know why his underpants were lucky.

For example, was it that he was particularly fortuitous with the fairer sex when he donned them?

His response to my query was the rather arbitrary.  Claiming he deemed them lucky as he’d never been knocked down wearing them!

Knowing I’d regret asking this, I then questioned whether he’d been knocked over in any other underpants, to which he responded he hadn’t. I wanted to know why the others weren’t lucky as well then, but thought it best to cut the discussion short at that point………God the quicker I get released from this asylum the better!

Below left is a picture of his lucky underpants. Apparently the pair on the right bring him no fortune whatsoever. 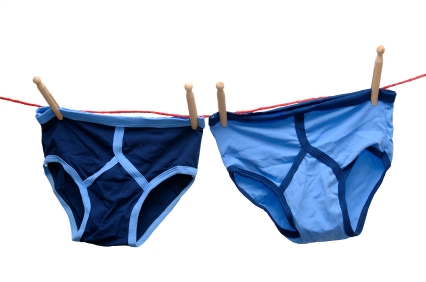 Yesterday, during a non-undergarment discussion, A friend and neighbour expressed his displeasure with the new reduced speed restrictions imposed on our estate.  He opined that the newly introduced 20mph restriction was too low.

He has no problem with the safety aspect of this edict. His gripe lay with the fact its introduction caused him to recently drive so slowly he was arrested for kerb crawling.

My friend was released without charge when the police realised their mistake, but he is still seething nevertherless.

Right, I best bring this ramble to a conclusion. I need to join the local search party for Frank’s lucky undies.